Gallop for the Gravy and a Bobble Head

Posted on December 2, 2013 by Running Boston and Beyond

I hope everyone had a wonderful Thanksgiving!!! Since I’ve had to be on the road so many years on Thanksgiving, I now enjoy staying home and most of all, running a race on Thanksgiving Day. This year it was the Gallop for the Gravy 5k held by the YMCA here in Wilmington.
The race fell on my 6th day of exercise, the day before my one day off per week, and my schedule had me running a 2 mile warm-up prior to the race. Needless to say, I was tired but I was ready to run. I don’t enjoy running pre-race, because I have always believed that that warm-up can take my precious energy away from my race. But I did what I was supposed to.  One mile in, I got warmed up so I took my big sweatshirt off.  I don’t know how, but the pins in my garmin strap came out so my watch started flapping all over the place. I haven’t had an equipment malfunction for a race before, but I knew I could just hold the watch if I couldn’t find anything to “fix” it with.  Thank goodness the lady at the Y dug through the front desk and found the perfect solution:  duct tape. 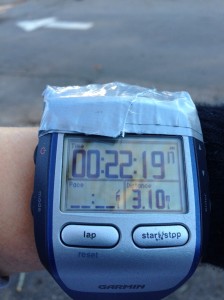 Duct tape can fix almost everything.

It was about 30 degrees out and felt that if I hadn’t done the warm-up, I could have gotten injured because it was just cold.

The race started at 8 am and I took off.  My goal was to run at most, 7:30 minute miles, and I was happy to find my pace was a little faster once I got settled in and past the crowded start.  I haven’t run a race in those temps before, so I was surprised to find that my lungs were a little, how do I say… sore?  Whatever it was, it was slightly uncomfortable, but I don’t think it had any affect on my finish time.  I was very please to finish in 22:17.

I had heard the race had cool bobble heads and a lot of pie giveaways, so I stayed for the awards, hoping to at least place in my age group.  I was thrilled to find that won First Place Masters Female and got to take home my own bobble head and chocolate chess pie.  I have never had chess pie before so when we dug into it, we found it was delicious!!!!  I was also very happy to find that my shin splints appear to be fully healed.  I’ve been doing speed work, longer mileage, and with all of that and a race, no pain when running or after.  I’ve been doing everything I can to help them heal and to prevent them from returning.  Let’s hope it works. 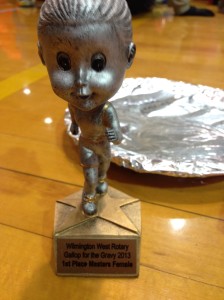 Thanksgiving was a wonderful day that I got to spend with my family.  Bonus was that we drove less than a mile to my sister’s house where we spent time with her and her husband…. a dream come true.  I have so much to be thankful for and spent the remainder of the weekend, sleeping in, doing my workouts, watching Christmas movies, drinking wine, and just being.  It. Was. Perfect.

Now that December is here, I’m enjoying a few last weeks of “light” training before the real Boston Marathon training starts.  I’m so excited, beyond thrilled, and have very high hopes for my running future.  The sky is the limit as far as I’m concerned.

Posted on November 27, 2013 by Running Boston and Beyond

As you know, I like lists.  So in the spirit of Thanksgiving, I decided to make a list of ten things I’m thankful for.

1)  All the obligatory things that most of us are thankful for.  My family, my kids, my health, my sense of humor, my husband’s company, my house, running water, grocery stores, a few bucks in the bank, the birds, leaves, waves of the ocean, and well, I could go on and on.  There’s not a day that goes by that I know I’m lucky, I’m thankful, I’m appreciative of these things in my life.

2) Lists. I’ve mentioned this before, but what other little thing can give you such a sense of foreboding of all the things to be done, organization of said things, and then a sense of accomplishment when you can put a nice little line through each thing you’ve either put in your grocery cart or completed?  Could you imagine the grocery stores if we didn’t have lists?  I would still be wandering around the grocery store wondering what I needed for our Thanksgiving meal, then returning about a hundred times because I’d keep forgetting what ELSE I needed…. and I don’t know how I would have gotten through listing our Texas house for sale with out multiple lists.  Lists are a wonderful thing.

3)  My husband, Andy.  He’s my biggest athletic supporter, my jock.  He pushes me to follow my dreams, supports all the work along the way, and yet, doesn’t post videos on YouTube of me doing the Wobble in the kitchen.  He lent his shoulder to me after my attempts at Boston failed, he danced around with me when I made Boston.  He is my sherpa, photographer at the end of races, my driver when I’m tired. He calmly listens to me when I perk up and say, “Honey, I have an IDEA!”.  He doesn’t judge me when I have one too many glasses of wine.  I’m a roller coaster, and he’s the calm, the even one, the rock.  Love you, R. Andrew. 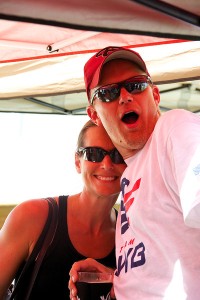 A sense of humor is essential.

4) Coach Alain and the Gotta Run running group in Katy, Texas (a town near Houston where I lived until a few months ago).  It’s hard to imagine not accomplishing your goals when you have someone constantly telling you that you can.  I don’t know how many times I second guessed my goals while training for the 2013 Houston Marathon.  But when you have someone look you in the face, put his hand on your shoulder and tell you, “You got this”, it’s hard to not go get it. 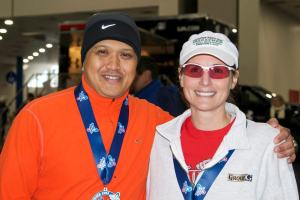 Coach Alain and me after the Houston Marathon. 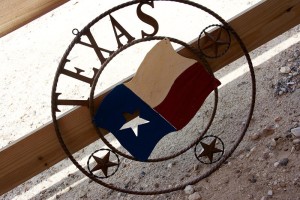 A gift from my Texas peeps that is now in my back yard in NC.

5) Coach Kristen.  Now this is interesting.  Had it not been for Kristen, my current coach in NC, traveling to Houston in 2012, I would have never joined a running group.  Talk about irony…. Kristen was my sister’s coach and came to Houston to run the 1/2 marathon and wanted someone to pace her.  I ran 5 miles with her (there was no pacing done, Kristen ran like a rock star) and when I saw all the amazing support the Without Limits crew gave to each other, I knew I wanted to be part of a team.  So three days later, I joined the above mentioned Gotta Run group.  When we moved to NC, Kristen became my awesome coach, the one who listened to me whine and moan and groan about shin splints and all that had to offer, the one who constantly tweaked my training plan to adjust for my injury, the one who has given me such good advice to make me a better athlete, the one who will train me to be the fastest marathon runner I can be, plus a triathlete.  She’s teaching me patience too, although she may not know that the jig is up – I’m on to her.  Thanks Kristen, you effing rock.  Seriously, I am so thankful for you.

6) Energy Drinks.  When you’re driving millions of miles (ok, it FELT like a million miles!) across the country and you’re tired and worn out and stressed, you need to stay awake, right?  Same goes for getting up early to train and then spending a hundred hours watching your kids at football practice. Drinking coffee would only make a 10 hour trip into a 15 hour trip due to constant pee stops so I found energy drinks.  Sugar Free Red Bull is my favorite but I found Amp is just about as good, plus it has “vitamins” in it.  When I’m exhausted and can’t get a power nap in, which is most of the time, I’ll grab one of these and then a short time later, GAME ON.  I also realized I cannot have this after 5 pm or it’s GAME ON until midnight. 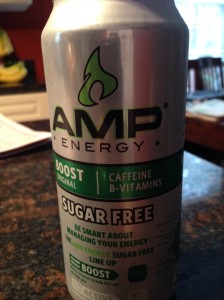 I believe someone will discover this is the real source of super powers.

7) Music.  Music can take me to a time and place in an instant and distract me from anything that’s on my mind that I don’t want on my mind any longer.  It can make me cry, laugh, dance, and run faster.  I’m also thankful for iPods and iTunes to make getting music so much easier!  I remember having my radio on, waiting the arrival of my favorite song so I could push the RECORD button and then have that song at my fingertips.  Then there was the Walkman, the barbarically sized thing that I hooked to my shorts so I could run with music.  How cool was that???  Probably not really cool considering the size of my foamy earphone things.  Yikes.  Now I have about a billion different songs that I can easily shuffle through while my tiny little earphones stay tucked into my ears.  I’m thankful for that.

8) Doctors.  To make a long story short, doctors can diagnose and then remove cancer from your mom.  They can do CAT scans so you know your sister doesn’t have a brain injury after a bike accident.  Besides that, as a runner, it’s nice to know that when you have issues with your various body parts, you can visit a physical therapist or chiropractor to heal said messed up parts.  I get chiropractory things done to me and after, I feel all twisted up pretzel-like as if I’ve just gotten out of the dryer.  But I’m finally running without pain and so my chiropractor can twist me into a pretzel and then do active release on my shins as much as he wants.

9)  Beer & Friends.  These things go hand in hand many a time, and I’ve needed them both this year, so I am thankful to both this year.  I have amazing friends, and we’ve had some great times drinking beer. Just as many NOT drinking beer too, so no one send me the link to AA – I’m a responsible marathon runner.  My brother-in-law brews beer. My husband brews beer.  And what do you get at the end of a lot of races????  Yup, beer.  I’m always thankful for that. 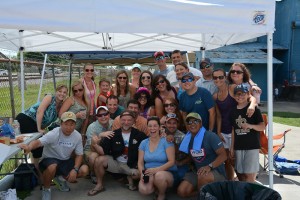 A group of us at No Label Brewery – the perfect mix of beer and friends.

10)  Running.  Surprise!!! Haha, I’m stating the obvious, but I am SO THANKFUL for running, for the ability to run, and all that running does for me.  I’m heading to the Y to run the Gallop for Gravy 5k in the morning, so I get to do my favorite activity on the day I’m most thankful for it.  Then I’m going to eat my body weight in mashed potatoes and gravy and probably have a beer. 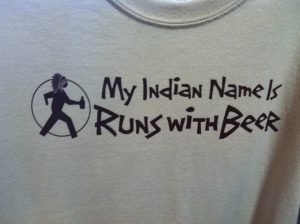