Moving On From Living On Edge

Posted on November 12, 2013 by Running Boston and Beyond

After nearly 2 1/2 years of living on edge, which is not to be mistaken with living on THE edge, I can finally breathe.  I’ve felt like the rug was going to be pulled out from under me for so long, and I’ve been preparing, planning, moving, buying, selling, bartering, and doing things accordingly so we would be ok if that did happen.  Basically, I’ve been living on adrenaline for a very long time, and I’m tired.  The rug did get pulled in a matter of sorts, more than once, and lookee lookee, I’m still here, and we are all ok.  After living in my house for three months, I feel like I can finally relax, I can breathe, and I can start truly living like I’ve wanted to for so long.

I don’t want to bore anyone with all the little details of what has taken place over the last few years, but it includes my husband facing a layoff but being lucky enough to find a job prior to that, then him having a job he grew to hate and then had to drive 3 hours a day to go and do, moving over 1,000 miles, twice, with two kids and four cats, the changing schools, us all leaving friends we dearly loved TWICE….. you get the picture.  It was just very stressful.  Would I change it?  Absolutely not.  We learned a lot about ourselves, more than what we could have had we not gone through these difficulties, trials and tribulations, and just life in general.

So here’s a list of 10 things we learned in just the last few years.

2)  Running is my damn castle.  It holds me up, it protects me, it gives me strength.  Running is the one thing that is purely MINE.  It’s me NOT being a “homemaker”, a term I literally hate, it’s me NOT being a mother, NOT being a wife, NOT being anything but just me and what I want and what I need.  It brings me peace, it makes me happy.  I don’t have to listen to the stupid fucking statements, “What do you do all day?”  “You don’t even work part-time?” “I couldn’t do what you do all day” “You’re so lucky you don’t have to work”.  I would love to spout off in response to these statements, but I know that it’s pointless.  I just run, and think, and think while I run.  Sometimes I come up with my best ideas when I run, sometimes I think about the leaves and ocean.  I realized how much running was a part of me just a few months ago when I had shin splints so bad I had to stop running and defer the marathon I was COUNTING ON running, which is something I’ve never had to do.  I turned into a freaking nut case, grasping at straws, trying to make the injury go away by ignoring it.  This was the time I needed running more than ever, and I couldn’t have it.  I’m finally at peace with everything, the deferment, the chance to just run for another month or so before gearing up for training for Boston, the cross-training I’ve done because of it.  I can look at it with a healthy sense of, “Sigh” and “It is what it is” instead of “WHATAMIGOINGTODOWHATHEHELLSHIIIIIIIIIITTTTTTTT”.  Which leads me to:

3)  I like to swear.  Go through this bullshit and see how much swearing you do.  I swore before, but now I’m a little less filtered.  Some people say that if you swear, you are suffering from a sort of ignorance because you can’t come up with anything besides a swear word.  Well, they can suck it.  I swear.  Big freaking deal.  Swearing isn’t important in the grand scheme of things.  I honestly don’t give a shit what they think either.

4)  I give less of a shit  about stupid stuff than I did before.  Neighborhood drama ran fast and frequent where we lived in Texas.  So did materialism, big time.  What really truly matters to me is my family.  It doesn’t matter if we live in a tent as long as we are happy and together.  The rest of it is just bonus.  I’m also putting us first.  I don’t feel the need to do things out of obligation the way I used to.  My kids and husband and our needs/wants are first.

5)  I live with a daily sense of gratefulness.  All along this journey, I whined and complained, but I also knew it could have been or could be so much worse.  There is not a day that goes by that I’m not grateful for everything in my life, because no matter how difficult it may seem at the time, at least I am alive.

6)  My family freaking rocks.  My two kids, husband, and I, plus our four cats, lived with my parents two years ago, just before we moved to Texas, and then my sister and her husband when we got to North Carolina in late June, while we looked for and waited to close on our house. AND WE ALL STILL GET ALONG.  There’s nothing I can do aside from buying them a freaking month-long European vacation to repay them, so the only thing I’ve been able to do is just say thank you.  So thank you Mom and Dad, Randee and Chip, including cats Sammie, Jack, and old Tom.  YOU ALL are our rock just as much as running has been for just me.  You made a really difficult situation into something fun and enjoyable.  And that’s a huge understatement.  Thank you.

7)  My husband and kids are rock stars.  My husband and I have grown closer over all the shit that we’ve had to do the past few years.  We’ve listed (that’s an entire list of ten things right there because listing and showing a house is NOT for pansies), sold, searched for, negotiated on, and purchased houses, bought cars, sold cars, researched schools, sports clubs, and everything in between all while dealing with the detailed logistics of getting our entire family and moving truck full of shit to our destination on a specific day with the least amount of damage done.  Twice.  Apart, we are pretty good at it, but together, we fucking rock. 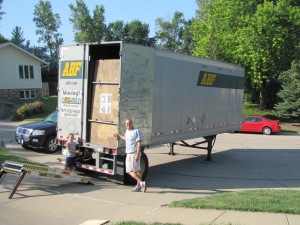 8)  I’ve learned the painful truth that you lose friends when you move.  You find out who your friends are and who your friends are not.  I’m the kind of person who has a few REALLY close friends, and that’s just the way my personality works.  But my true friends are ones I can count on.  We can go a few months without talking, but when we do talk, it’s like no time has elapsed.  I’m very lucky for them, especially since I haven’t always been a good friend back, but they’re still there for me.  If you’ve ever moved as an adult, you realize who is there for you after the dust settles.  And who isn’t.

9)  I worry.  A lot.  About everything.    I’m guessing this is very common, but the one thing I do know now is that I don’t have to worry as much as what I used to think was necessary.  (See, I’m already worried that I’m offending some non-swearing person and then he/she will not read my blog anymore because I have a lot of swear words in it.  But I’m not worried enough to actually change it – progress.)  Things really do have a way of turning out the way they’re supposed to, and worrying doesn’t make a difference.  Don’t borrow worry from tomorrow…….

10)  I’m a damn athlete and a good one at that.  It’s taken me 40 years to actually call myself an athlete.  I always had a perception that athletes could only be the ones with less than 10% body fat, were the winners of races, and were the gazelles among the field ponies like me.  I don’t know what shifted in me… maybe my 40th birthday, maybe it was because I don’t give a shit about labels, maybe because I’m tired of reducing my accomplishments to less then what they are.  We runners are athletes, no matter what.  And I can also give myself credit for the damn good times I bring in when I run.  No, I am not the fastest, but again, that doesn’t diminish who I am as an athlete.  I qualified for Boston, and yet I find myself thinking I’m not good enough or fast enough to be considered a true athlete. I crossed the finish line in front of 83% of all of the other finishers in the Houston Marathon, and even beat 78% of all the men finishers.  I AM an athlete, and I am a GOOD one too. 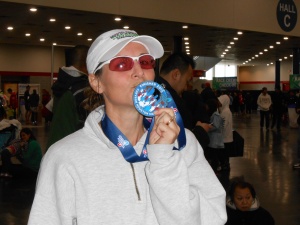 After my BQ run at the Houston Marathon

SO what exactly does this all mean?  I’ve learned that I can go with the flow, that my extended family is awesome, I have amazing friends, and that I have to put my husband and kids first.  I’ve also learned that I need to give myself a little more credit for my accomplishments.  In doing that, I feel a little more inspired to keep going, to try harder, to inspire others to follow their dreams, to give these next goals my absolute all.  I want to PR in the Boston Marathon.  I want to finish a 1/2 iron distance next October.  But if I don’t, I’m sure not going to worry about it.