Posts Tagged With: riding a bike

You know when you sign up for a race and it sounds like a really good idea and how awesome of a training event it will be for a bigger event and then the race gets really close and then you wonder what the hell you were thinking when you signed up for it? Yeah, that’s me this week. A long time ago, when it sounded like a great idea, I signed up for a double sprint tri that takes place this weekend. And I’m really scared to do it. Why? Because the swim is in the OCEAN, y’all. The friggin ocean. I saw the ocean yesterday, and it was angry. Yes, Ana was passing through, giving us all her Mother’s Day finger, but the ocean is not something that can really be predicted nor tamed. At least not by me. I can barely swim in the waterway when it’s windy without getting a face enema, so I really don’t know how this race is going to play out. Well, I did read the participant list, and I know I’m going to do so awesomely well and place in my “Masters Novice Female” category. The fact that I’m the only one signed up in that category is of no significance, mind you. I’m going to kill it. Unless it kills me first. Let’s say I’m trying to find every possibly way out of NOT doing this tri, but the only response in my head after I think of a completely logical reason (such as DEATH BY DROWNING), my mind just tells me to shut the hell up and quit being such a wuss. I’ll keep trying.

So how IS everyone, anyway? I’ve been in my fundraising, “secret surprise”, dog-fostering, and long bike ride on the week day haze. 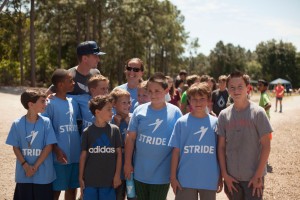 Some of my Stride boys with our fabulous MC, Colin from It’s Go Time

Speaking of the fundraiser I’ve been telling you about, let’s say the ONLY thing that could have been better was about five degrees shaved off the temps. The kids were supposed to run for 20 minutes, but we backed it down for time constraints, but I think we really would have had to anyway or we’d still be peeling those melted elementary school kids off the concrete. So far, we’ve raised over $2000 to help save the UNCW running programs, and we have this week to get in the rest of our donations. I’m planning to take the coaches a “big check” early next week. The event went off without a hitch, and everyone had a great time in the process. Lots of the athletes came out to support our little runners, running with them, cheering them on, and even doing their hair.  It was a great thing to see come together. 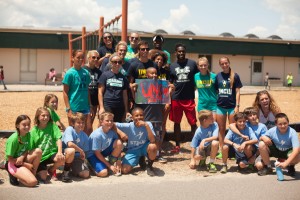 I had a foster dog for a few days last week, and it wasn’t all fun.  The poor thing had an allergic reaction to SOMETHING, and he just couldn’t stop itching. I took him to the walk-in vet the morning after I picked him up (and he kept me up half the night pacing and itching), and a strange series of events led him back home.  It was really meant to be, since it was by a total chance meeting with someone at the vet office who KNEW how to reach his owner, a family who had been looking for him for two weeks. He is a 14 year old beagle named Walker, and I was able to get him back to his people on Friday evening. Good times.

Some of you probably heard something about this little tropical storm called Ana who decided to blow through our area this weekend.

In order to get my long bike ride in, I decided to complete the ride on Friday morning since my in-laws were staying with us and Saturday was predicted to be a washout. I love to listen to loud music while I bike, so I figured it would be best to do this before they got to the house (and not when the family was trying to sleep – I’m courteous that way). I knew it would take a lot, mentally, to get this done, but I figured it was time to just grit my teeth and bear it. My legs screamed at me, probably because I did some harder interval work during the week, but I pushed. I can’t say the trainer is the equivalent of riding on the road, but it was a great long bike, my longest on the trainer and longest of this year. 56 miles in 3 hours. Done. The fastest I’ve ever been able to go. I learned a lot about my bike, how to adjust my gears, and that it’s only going to get harder from here, so just quit being a pansy ass and get to work.

On Saturday morning, I needed to get another workout it, so I decided to hop on the old bike again and got an hour in at an easier pace. My legs were tired, but I felt good. We slept in, so it was late, and I skipped my post-bike run.

When I got up on Mother’s Day morning, I looked at the radar and saw my chance at a run, which is really all I wanted to do that day. It would have felt incomplete had I not been able to run, so I got my 4.25 miles in and came in not long before the first monsoon started. 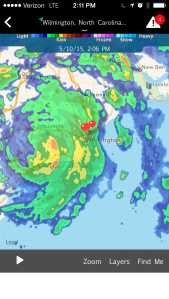 It rained A LOT for a while.

Mother’s Day was a very nice day, and I hope all your mother bloggers reading this had a special day. I don’t know why, but I’ve seen a lot of negativity regarding Mother’s Day this year. To me, it’s just a day we set aside to tell our moms how much we love them, do something a little special for them (and ourselves), and pay tribute to those mothers we may have lost. My motherhood is not the end all, be all, of me as a person, and I don’t let my identity get all wrapped up in just being a mother, which is probably why I don’t feel too guilty when I do other things outside of parenting. I am a person as much as I am a mom, and I want my kids to see that I have a valuable life besides being their mom.  It can be difficult since I am a stay-at-home mom with kids in school, for sure. Seeing the Mother’s Day backlash was sad. I think it’s a great day to celebrate, just as a birthday is. So celebrate away.

That being said, I’ve got sort of an interesting week ahead. I have a lot of work and research to do, and I’m taking it more easy with this pesky triathlon coming up. Our end-of-season race for my Stride kids is Saturday, so I’m hoping to pull out a 22:00 5k if I can. Hopefully the weather will cooperate and the humidity will decrease a little from the 8,978,409% current reading. It’s humid, people. Even the mold is moldy.

Have you ever signed up for something thinking it was a great idea and then question your sanity the week before that event?