Pizza, Beer, and a PR

Posted on January 28, 2014 by Running Boston and Beyond

Last Thursday, I headed back to my old stomping grounds just outside Houston to visit my friends.  Had to be sure I checked my bags before I closed them for good.  Anyone else ever find this when they go away? 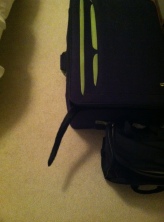 Someone wants to go with me!

Living in southern Texas is hot, or at least warm, about 95% of the time.  Except for this year and especially my first night there.  All the people were “excited” over the possibility of an ice storm and snow and all that brings when things like that only happen every few years. All I could think about was getting my run in before the rain and temps dropped!!  As soon as we got to Nichole’s house, I got out my running garb and took off for my 7 miler with 3 miles of pick-ups. It felt pretty good and I was happy to finish just as the cold rain picked up.

Originally, the plan was to do the “beer run” in town, which is an informal run of however long you want and then socialize while drinking beer, then order pizza from my absolute favoritest pizza place evah, Grimaldi’s. Unfortunately, the weather deteriorated so much that only one crazy runner was out, but we went for the pizza and beer anyway. Score one for me. I am quite a pizza snob, so had been dreaming of this pizza for about a month.  It did not disappoint and I got a big enough pie that I could eat off it for a few days. Mmmmm, good stuff.

That night and into the next day, it rained and the rain froze, so my friend and I sat in front of her fireplace and chatted for what seemed like hours. Thank goodness that was my day off, so I didn’t have to worry about running in the icy cold. This is what we did to entertain ourselves. 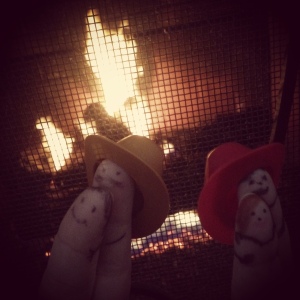 That night, we went out for more drinks with more friends and stayed at a dance club that had enough second-hand smoke to give emphysema to the entire city of Houston until 1:30 am. Cough. But it was fun and I got to do the Wobble.  Bonus.

On Saturday, I got my 5 mile easy run in and then went to the best social event in, well, almost everywhere, the No Label Brewery tasting.  Five bucks for four pints of good beer.  A bunch of people I knew were going to meet us there, so we socialized, drank our pints, and had a great time.  It was so good to be outside in the warm sun surrounded by friends having a cold one. 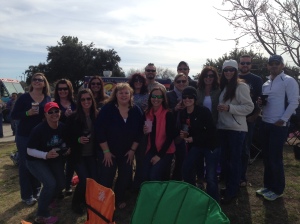 A bunch of my peeps at No Label Brewery

I realized that I was not in my twenties later that day when I just got reeeaaalllyyyy tired. I stayed at another friends’ house and when we were at dinner, I felt reeeeaaalllyyyy old. I just wanted to go to bed.  So when we got back from dinner, I did just that.  My long run that included a 5k race was on Sunday, so I wanted to be prepared for that.

Sunday was a beautiful morning.  I wish I would’ve taken my phone with me so I could’ve gotten a picture of the steam rising over the waters in the bayou in George Bush Park.  Just gorgeous. It was a cool, crisp start to what was going to be a really nice warm day, for January anyway. My goal for the 5k was to crush it, but as normal for me, my warm up felt a little sluggish and I didn’t put too many expectations on my performance.

It’s a pretty small 5k, but it’s a really cool concept.  It’s free (you can make donations), and the point is to just get people out and active.  They’ve grown from 50 or so runners to a few hundred with chip timing too, so it was fun to participate.  I had PR’d on that course the year before while training for Houston, so I wanted to again.  When it started, I took off and ran a bit before looking at my watch. I thought I was going close to my goal pace of 7:00 minute mile, but saw I was actually going about 6:30-ish.  Yeah! Mile 2, as expected, was a little harder and I know I slowed down a bit.  I was passed by a lady who was older than me, but she had the most amazing stride. I wish I looked like her when I ran!  I knew there was no way I could catch up to her, so I let my competitive urge go.  Then a little later, she was stopped off to the side of the course – boo. I like to win my age group and things like that, but I do not like to see other athletes pulled up at the side. 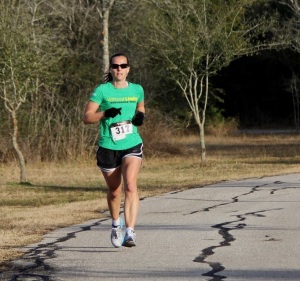 Near the finish of the 5k.

I was getting tired when mile 2 hit, but I knew that I would regret not giving the race my all, so I kicked it back into gear. I cannot for the life of me do any sort of math during that kind of run, so I just waited until the end to see where I was regarding the PR.  My watch time was 21:15 (chip time was 21:13!!), so I was absolutely thrilled to race that well and PR by about 37 seconds.  The race is pretty small, so I ended up with first overall female, which was pretty cool.  I saw some familiar faces, gave a few hugs, and then headed out to finish the rest of my run that included two more miles of pick-ups. Gasp. I got ‘er done and headed back to hang with my friends.

What a good weekend.  The timing was good with coming in before their ice and getting back before ours. I got to socialize with my friends, drink a little beer, and do my running that included a PR.  I’m actually liking 5k races a lot more and find the challenge to be a good one. I am now making a sub-21:00 5k my goal.

So the marathon training continues here at home with a wacky schedule due to our “snowpacalypse” coming. I did get my 7 miles in today and tomorrow’s swim will depend on if the Y is open for business.  School was closed today and tomorrow and possibly Thursday (appears that the kids will be going to school until friggin’ July), but we will see what actually happens. We’re all stocked up on our food, drinks, so bring it on, Mother Nature!!