Posted on February 9, 2014 by Running Boston and Beyond

Some days I wake up grumpy and I don’t know why.  I always get up on the same side of the bed, so it’s not like I’m getting up on the “wrong” side of the bed. I had a 10 mile run on schedule for this morning in downtown Wilmington so I could get some hills in, although the “hills” of Wilmington aren’t big or long. They’re better than just running on the flat surfaces and I can always tell when I run them, so I know they’re doing some good.  I didn’t have the best day yesterday, for no reason in particular. I was bound and determined to not be grumpy about it, even when I had an “undesirable” run in 40 degree rain, my kids were arguing over who touched each other’s Lego’s, my awesome dog won’t stop digging in the back yard, and we had to attend an outdoor birthday party for my son’s friend.  It was 39 degrees. And that was just before 1:30 pm.

So when I got up this morning, I knew I was grumpy and I knew I didn’t know why. I made it through Saturday ok and I can think of a million things that could have made the day actually bad instead of irritating, so I figured I’d be in a better mood today. Wrong. I drove downtown and started running.  It’s pretty quiet at 8 am on a Sunday, and I found myself really enjoying the silence, only broken by the low volume of my iPod in my ears. I could hear the birds, a few cars, and then, pretty much nothing. Oh, I did hear myself say, “Holy crap you scared me” when another runner passed me when I didn’t know he was behind me.  Gotta love those exhilarating moments that get your heart rate right up there. Besides THAT part of it, it was exactly what I needed.  I felt better after my solo excursion, and no matter what happened to me the rest of the day, I was determined to make it a good day.

STEP 2: Look around at your surroundings.  Appreciate it.  I looked over the Cape Fear River when I got to my destination and that immediately made me feel better.  Maybe it’s freezing out where you are and you’re looking at the nice digital numbers on a treadmill.  Well, aren’t they GORGE?  Beautiful, huh!? Those glimmery numbery things. 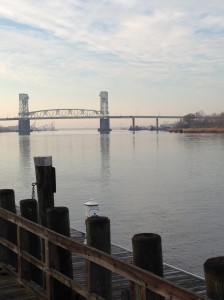 STEP 3: Do something nice.

I saw several sanitation workers downtown who were cleaning up messes from the day and night before.  I felt for them because I do the same exact thing, just in my own house. I’m sure they were thinking “WOW, these people are so damn messy”.  Yup, that’s exactly how I feel at home.  So I picked up a few pieces of paper I saw and threw them in the trash.

I also saw a situation that pissed me off and decided to go “help”.  A guy was standing there yelling at his girlfriend with her little son just standing there watching the entire thing. I didn’t appreciate it and wanted to be sure the girl was ok. So I inserted myself in a situation that could have turned out to be volatile, but I wanted the girl to know I was there and was watching.  I said a few unsavory things to the guy to which he replied and blamed it on her, but I’m the “fight” kind of person in a “flight or fight” situation like that, especially if there’s a child involved.  I didn’t feel she or the kid was in danger at all, so I left.  They probably didn’t think I was helping, but I smiled at the kid and he smiled back.  That’s all that mattered to me.

I was there to do 4 miles of hills and the rest not-so-hilly.  I ran two miles out and back and then did the figure 8 on the three streets that have the short but steep hills. There’s some steep parts (shown in picture) and then the streets between them have a nice slope as well.  When I got to the hills, I worked it and I added a few hills in when I wasn’t supposed to, just because. My legs felt tired, my breathing increased, I sweated. Good work will almost always make you feel better. If you’re not doing hills, give a few miles a push, and that should do the trick too. 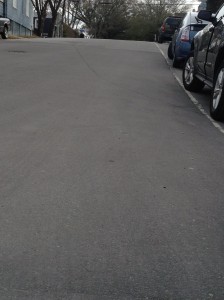 STEP 5: Listen to good music. When I’m irritated, I like to listen to music that includes swearing (Eminem anyone?).  So I listened to some of that, and then as I started to relax and got the cobwebs out of my head, I listened to my 5k play list.  That always makes me feel good and energized.

STEP 6: Make lemonade out of lemons. Yesterday’s one-hour run could have been a nightmare. I don’t normally mind running in the cold or the rain, but the cold rain really bothered me this time.  The minutes ticked by slowly, and I counted down.  “Ok, one fourth the way through, one third the way through….” until I was done. I pushed all the negative thoughts away because 1) I knew I had to get my run in and 2) I had to get my run in and 3) it wasn’t snowing.  There was no reason to let it bother me.  I got to talk to a good friend at the cold birthday party too, so that was good. Negativity begets negativity and I didn’t want to allow it in.

STEP 7: Do something different. If you’re having one of “those” days, try to shake up your routine.  I went down town to run, something that I’ve only done once, and it was a nice change.  After I was done running, I went to a little coffee shop and had something I normally don’t get.  First of all, I rarely get coffee from any other place than home.  Second, I normally just get coffee.  So this morning, I had an amazing white chocolate raspberry latte.  It was worth all the calories.  I savored it all the way home and even shared some with my son who happens to love coffee. Well, coffee with something else in it besides coffee. 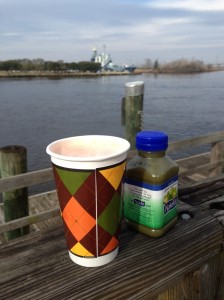 STEP 8:  Be thankful. I have had major injuries from running before, and I know how much happiness I get from running. I was very thankful that I was able to run.  I GET TO RUN THE BOSTON MARATHON.  I was happy that I have a family to come home to, a warm house, a goofy dog, demanding cats, and all those things.  Yes, they irritate the crap out of me sometimes, but I’m thankful they’re all there to irritate me.

STEP 9:  Listen to this song and believe it to be true.

Chances are you’ll be singing along too.  All day. And then the next.  Who can’t be in a good mood when you’re always singing about how awesome things are?!  Thanks Lego Movie.  YOU are awesome.

STEP 10:  If all of the prior nine steps fail, go home, pour yourself a glass of beer or wine, sit your butt on the couch with your feet up, and watch your favorite show.  I’m limiting myself to only ONE glass because of my training.  And there you go. 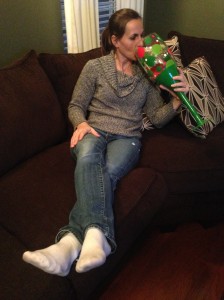