Mile-And-A-Half Repeats – Even Funner Than Those Mile Deals

Posted on February 12, 2015 by Running Boston and Beyond

I think I’m done punishing myself for being so leisurely about marathon training while in Vegas. Besides my house being a total disaster that I should be cleaning but instead, I am sitting right here and totally putting it off, we’re pretty much back to the same ole. Yippee.  The weather needs to go back on its meds, too. It’s cold, windy, rainy, warm, freezing, warm, then this weekend is going to be super cold. Like a high of 32. I know, I know, all you northern people are shaking your gloved fingers and stocking-covered heads saying, “You don’t know cold, lady!” But it’s cold…. for us. And for what I’ve pansied myself to since moving south.

Tuesday was the really good 10 mile pace run, and Wednesday’s “easy” 5 mile run turned into a pace run, simply because once I started at a pace, I didn’t think I should slow down. Because that makes sense.  Then today? Erg. Today I decided to build on my mile repeats from last week and tackle mile point five repeats. Four times. Because I like to train. I knew it would benefit me more than 800’s would. I  knew it would be good for my mental strength to push myself really hard and not talk myself out of doing them or reducing the number.

I REALLY tried to talk myself out of the workout. REALLY. But I want to cross that finish line in just over a month with a PR. It takes work to do that. So it was time to get off my ass and get it done.

I headed back to UNCW’s campus, parked at the track, and warmed up for .7 miles. It was WAY warmer than what I thought it would be, and I forgot my short sleeved shirt at home, so I pulled up my long sleeves and dealt with it.  After whining to myself. There’s a paved trail that goes about 2 miles and then hits a road, so I figured that would be the best place to take on my 2400 m repeats. I put on my good playlist and got the party started.

What can I say about where my mind went during that first one? It’s not rated G for “good language”, that’s for sure. But I nailed the first mile and a half at a 7:02 pace. I was worried about my Garmin not working in the trees, so I was happy to see that the pace was accurate. I know the difference between an 8 min mile (I can talk a little) and a 7 min mile (I cannot talk a little), and am familiar with what’s in between, and it always pisses me off when I know I’m going faster than what the thing registers. I walked quite a while to recover from the first set (I was supposed to run .5 mi but I didn’t), was happy to have my breathing and heart race come down fast, and headed back to start set two. Here I go!

Set two had some head wind coming back, but I was able to keep the pace well. Garmin would change from 6:30 to 7:45 without me changing my pace, so I was slightly peeved about that, but the end time showed I did pretty much the same as set one. Then my Garmin had a tantrum for sets three and four. I have a landmark for one mile and the distance was off, but I think I pretty much stayed at the same pace, if anything, slightly slower, but still within the range I wanted to go. I REALLY wish I had an accurate measurement for the mile point five, so I knew exactly what my pace was, but I guess I’ll just have to measure a few times with all my Garmins to get it right next time. When I’m going in the lower 7 mm pace, and it tells me I’m going 7:45, 8:30, I get pissed. Is there a niner in there? How many times do you think I can use the word pace in this post? 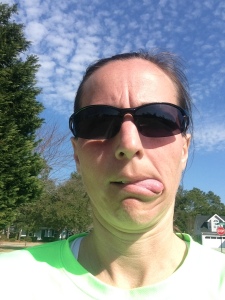 After my workout. But at least the sun was shining.

I think I think I dialed it in pretty well today, and I’m really looking forward to having tomorrow off before the deep freeze 30. Thirty miles to run this weekend in the cold. BUT I get to run with some friends on Sunday, so I’m pretty happy about that. I may even head to the pool to do a little practicing of my new skeelz from  my lesson a few weeks ago, but will have to see how I feel. I’m in denial about the swim clinic I’m going to next weekend with Sheila Taormina. Yeah, I’ll be swimming with a freaking Olympic medalist (ya know, JUST the GOLD) and world class triathlete. I might wanna practice up a bit as to not completely embarrass myself. I know the point is to learn from her, but it’s still a little, oh, overwhelming to know SHE will be looking at ME while I’m swimming.

I know everyone has enjoyed me complaining about my Garmin and how hard my repeats have been, but really, I love them after as much as I hate them during. Doesn’t everybody? I know they’re working, so that’s really what it’s all about. Next week is a set of TWO MILE repeats! I’m already procrastinating that one!

How do you handle crazy weather changes? Do you like mile point five repeats? Would you be nervous about showing your skills/lack of to an Olympic gold medalist?