Posts Tagged With: going for your dreams

Posted on November 11, 2015 by Running Boston and Beyond

Spoiler alert! I finished Ironman Florida on Saturday!!!! Whohoooo!!!!! I’ve been thinking of how I would write this post, and honestly, I have no idea where to start without having it be fifteen huge posts all about it! I can say that the experience was overwhelming for me, in a good way. I’ll start at the beginning. 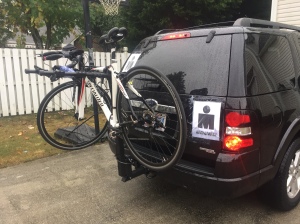 We left home on Tuesday so we could get to Florida on Wednesday. It was my husband, our two boys, five suitcases and backpacks full of crap (which turned out to be four too many), my bike, and of course, me. The travel went well, and we got into Panama City Beach early afternoon on Wednesday. We checked in our hotel for one night, then I went to get my race stuff. Ironman Village is pretty cool. I’ve never been to a big race like this, only marathons and Beach 2 Battleship, which, to me, is just not the same. People seemed calm, the vibe was good – not electric, but good and happy. I wandered around a little, met the Base Performance guys, bought a race belt, picked up my IM stuff, and bought a few things at the expo. I had no workout that day, so we did do a lot of walking, wandering, and absorbing. 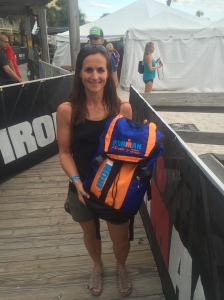 All registered and checked in!

On Thursday morning, I met a few fellow Without Limits (our coaching team) guys and we went for a swim in the gulf and an hour bike ride along the course. The swim was great, the water was warm and clear, and the bike felt good. 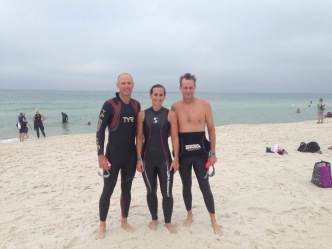 Doug, me and Phillip

The weather was warmer than I had imagined it would be (mid 80’s with very high humidity), and it really bugged me, but I had to wrap my head around it, absorb it, get mad about it, obsess and worry about it, then I got over it and made a plan to deal with it. HYDRATION was the name of the game. We moved hotels, and I got busy eating and making up my transition bags. I was glad we had a hotel close to the village, as there really wasn’t a place to park nearby and the city was on top of towing anyone who tried to park anywhere but a legit parking space. I felt so bad seeing cars with bikes on them get towed off to jail. My family had a nice dinner at a restaurant on the water, and because of the daylight savings time change four days before, coupled with a time zone change, 5 pm seemed like 7 pm, so around 7-8, we hit it goodnight.

On Friday morning, I woke up at 4:45 (which felt like 6:45 to me) and realized that 24 hours from then, I would be racing. I wasn’t nervous. Where were my nerves? Did I spend them all on worrying about the waves, the heat, everything else? I don’t know, but I was pretty darned calm for what I was about to do. We all got up, ate some breakfast, and headed to the beach so the kids could play and I could get a short swim in. The swim felt good. I mean good. The water was very calm, warm, and the strokes just felt natural, not tiring or what they sometimes do. I was feeling it, and I was really happy about that. We let the kids play a while, especially since they had been trapped in the car and following me around for a few days, and we headed in to clean up.

As we jammed to my IMFL playlist, I finished getting my transition and pre-race bags ready, and around 11-12, we took my bike, Diggy, and all my crap, down to Ironman Village to turn it in. The one thing about Ironman that I wasn’t expecting were the number of volunteers and the seamless process they had in place for registration and check-in. It was extremely orderly, the volunteers were great and informative, and within just a few minutes, I had dropped everything off in its proper place and scouted out the transition route. No nerves still. Maybe it was because I knew I had adequate training, maybe it was because I knew I could handle what was to come, I don’t know, but I just didn’t get nervous. I was excited, yes, but not nervous. I had a good feeling about the race.

Walking all my stuff to IM Village

That afternoon, there was supposed to be the Ironman Underwear run, which never really happened for reasons I’m unsure about, even though I had painstakenly purchased Wonder Woman undies then decided for something less revealing and got some Star Wars boys boxer brief things at Walmart. My boys were both registered for the IronKids .75 mile run that started and ended at Ironman Village. I wanted them to feel they were a part of the festivities, and they were pretty excited about being able to finish under the IronKids banner and get a pretty cool medal.

Too bad the big one’s eyes are close! They rocked the run, that’s for sure!

They knocked the race out, and we then headed back to the condo. After a nice chat with my coach, we grabbed the football and went to the beach to relax and play. It was just gorgeous out, and playing with my boys was a great way to end the afternoon.

Playing on the beach at sunset. Perfection.

On Ironman Eve, my husband and I left the kids at the condo in search of a big burger. That always suited me well for marathons, so I thought it was a good idea to stick with what works. We found a good one at a cool new place close to the hotel, The Wicked Wheel, and took it back to eat with the boys. Two seconds after I sat down, the burger was gone. 🙂 I got my list ready of the things I needed to get done before I left in the morning, thanked my boys for all their support over the last several months, and we headed to bed.

One thing I did NOT do, was drink a bunch of extra water. I had been drinking water, had a Gatorade at the expo the day I rode my bike and sweated out a bunch, and had not had coffee or any soda that week, but I didn’t drink extra. One thing I did before Boston was drink and drink, which who knows, may have had something to do with me running low on electrolytes during the race.

When I woke up at 2:45 am on Saturday, I found my nerves. All of them. They packed a punch, too. I laughed, and was happy I hadn’t felt that way before that morning. My hands were shaking!!! Does it make sense if I say I had nerves but no anxiety? I don’t know anyone who wouldn’t be nervous, at least just a little bit, and I certainly was a lot, but I wasn’t anxious about doing the race. I knew I had to break it up into pieces and get each piece done before I could move on to the next, all while being sure I thought about the big picture when it came to nutrition. I ate my toast and peanut butter, and went to lay down until it was close to leave for the Village, at 4:15. When we got to the village, I took my nutrition bags and filled up my bottles on the bike, checked my two transition bags, and then realized I couldn’t find my phone. I knew I took it from my husband as I went into the transition area, but I couldn’t find it anywhere. Tears. THERE was my anxiety!!! I knew it was just hiding from me!!! I fell apart. But I doubt it was about the phone.  Deep down, I knew we would get it back that day, and I didn’t think any of “my people”, the triathletes or volunteers, would steal it. But it gave me a reason to bawl, which made me feel better.

Ready to go on race morning.

It was time to head to the beach and for my husband to go get the kids. We decided to splurge on the VIP experience for them, so they wouldn’t have to fight to find a place to see me like they did in Boston. By the time I got to the beach (I was warned there would be a bottleneck and they were right.) That was the time I wish I would’ve had a buddy to hang out with. I was surrounded by thousands of people, but I felt very alone at that moment. When I saw the beach, full of people ready to watch the rest of us race, I got excited. I saw that the waves weren’t small, but it didn’t seem too choppy like it gets here, and I knew my ocean lesson was worth getting. I was confident I could handle this. For the first time, I was confident about the swim. I WAS CONFIDENT ABOUT THE SWIM. Something I never could imagine. 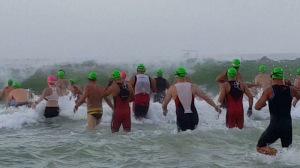 I was confident about THAT!!! Who’d-a-thunk that??!

I looked and looked for my husband and kids to no avail. I had a bag with some things in it, so dropped it at the morning bag area. They said the National Anthem. Still no hubby. Boo. The physically challenged athletes were on their way. I borrowed a stranger’s phone and found that my boys were indeed in the VIP tent. Whew. I just wanted to know they were there, which was the theme of the day for me. Seeing them made me calm, made me feel ok, and of course, made me happy.

Because the water temp was 77 degrees, it was not wetsuit legal. They allowed wetsuits, but we would have to wait ten minutes after the non-wetsuit people were on their way, and we would not be eligible for awards or Kona slots.  Yeah, no problem for me! I knew I wanted to wear mine so I didn’t waste extra energy that I would need to get over the waves and fight the current. I was afraid I would get too warm and it would drain me for the rest of the warm day, but it was a risk I was going to take.

It was time. My Ironman was about to begin.