Posts Tagged With: don’t give up on your dreams

My Road to Boston – Part III

My road to Boston has been paved with blood, sweat, tears, blisters, lost toenails, surprises, physical therapy, wine, frustration, pain, happiness, sadness, fear, excitement, euphoria, but most importantly, FUN.  It has been a total blast. For the first time EVER, I really truly understand it’s more about the journey than the destination. Sure, the destination is friggin’ awesome, but the journey has made my life more interesting with more depth, and the trip next week more meaningful. From that moment I decided I wanted to try and qualify for the Boston Marathon, it’s been the center of my running. Arrows pointed toward that city constantly, and I’ve made more decisions based on that than I could have ever imagined. It took a long time, but I’m almost there.

It’s the end of the journey…. or is it just the beginning?

So back to my story…. Part 1 is HERE and Part 2 is HERE.  My plans were to run the Houston Marathon again in January since I enjoyed it and was already registered. I didn’t know when I signed up that I would be living 1000 miles away, but I figured I would go back and run it. I started training in August.  My plan was to try and re-qualify for Boston again by at least five minutes so I could “just” run Boston and really soak it in… oh, what’s the significance of the five minutes? Well, let’s just say that just because you qualify for Boston doesn’t mean you get to actually run it. And I was thisclose to not being able to run it.  Five minutes would give me a comfortable cushion so I wouldn’t have to worry (as much) at registration time next year.

Because of the increased interest in people qualifying for and running this year’s Boston Marathon and the fact that I had “only” qualified by 1:42, I knew it would be a close call if I actually got to be one of those lucky runners whose registrations was accepted.  I was able to submit my time (basically, apply for a position) on Monday, September 16th.  I had to wait until Wednesday, September 25th to find out if I actually got in. That was the LONGEST and most stressful few days ever. I even made list of things to do while waiting.  Read that hilarious post HERE. I don’t think I would’ve been so stressed had I not gotten a case of terrible shin splints.  I ignored the shin splints until it was excruciating to run, even a mile, and then went to physical therapy to try and fix. I was in such turmoil because I wanted to be in the position to re-qualify in Houston, especially if I wasn’t able to run in Boston.

Ten drama filled days later, I got “THE EMAIL” that told me I was accepted. I found out later that day I had only made the cut by four seconds. (Read the hot mess full story HERE – can you say DRAMA?)  I think about four seconds over a marathon and that’s a sip of water, a slurp of gu, and at the end of that particular marathon, I started channeling my grandmother .1 miles early and started to kick it like she always told me to (I was delirious and thought that marathons were 26.1 miles that day). Served me well, and had I not done that, this blog would be talking about something completely different today.

I ended up deferring the Houston marathon and just had to let it go so I could heal my shin splints. It was difficult and I still wonder what would have happened had I been able to run that race, but I know that it will be ok. I know that running Boston this year is an honor, it’s a dream come true. Will I re-qualify? Well, I won’t know til it’s over, but at this point, I’m just happy with the fact that I’ll be there. Of course I want a PR run that day, one week from today, and I’m trained and physically able to do so, but that’s not what this race is about. The Boston Marathon is about following your dreams, it’s about keeping with something, not giving up. It’s about running, the stories behind the runners, the crowds, everything that marathons stand for: endurance, perseverance, and for me, doing something that I truly love to do.

Looking back at all it’s taken for me to get there has made my trip to Boston more meaningful. I had forgotten some of the details, the pain, the drama, that it took to get to right where I am. It really has been about the journey before the journey. So what if the weather is hot? Rainy? So what if I run two minutes too slow? Really? I’ve already decided to let all that stuff go. I can’t let any negativity in, I won’t let anything ruin what I’ve spent almost five years trying to get to. I hope other Boston Marathon runners do the same. We are type A runners, we live on times and goals and breaking our goals and split seconds. But really, this experience is beyond anything I could have ever dreamed, and I’m not even there yet!!  A week from today, I’m running the Boston Marathon, and I’m going to have the time of my life. 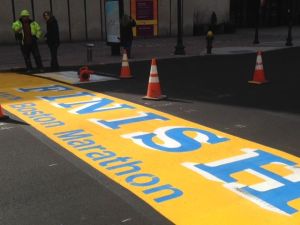