Posts Tagged With: carb up for marathon

It’s the day before the big race, the marathon, the day I’ve been waiting for for months. I was looking forward to it and dreading it at the same time. I got up, ran my shake out run, the weather was good. It was cold and cloudy. Could tomrrow be a PR-making day?

My son came home from a sleepover Saturday, and ironic enough, he didn’t sleep much. We went to his soccer game, came home, and got ready to go out to the race festivities, all while I’m stuffing my face with carbs.

Friday evening and Saturday were packet pickup, and on Saturday, there’s a 1-mile fun run and a 5k race. The full and half marathons were on Sunday morning.  I have to say, the Wrightsville Beach Marathon is relatively small, but it’s getting bigger and better.  I easily got my race packet and then my son’s packet for the 1-mile run that was Saturday evening.  The expo was nothing new, and I wanted it all, but didn’t buy anything.

A beautiful day for the expo, 1 mile and 5k races!

My husband is the head of the Cape Fear Clemson Club’s aid station for the race, so he was in charge of meeting The Tiger, the only “real” mascot who came to the college team themed race. It was cool to meet a real mascot. He started with the 1-mile and 5k races and was at the Clemson aid station during the marathons.

My boys and The Tiger

Then it was time for my son’s 1-mile race. Evidently I signed him up early last year, and thankfully the race emails all participants, because I had no recollection that I had signed him up until I got the confirmation email. Oops. The race does keep you informed well in advance, so there should be no question as to when or where events were taking place. Pretty awesome. It was time for my little one to run. I was slightly nervous, but he’s been running A LOT lately, so I figured he’d be just fine.

It’s not often you can say you ran with a leprechaun. My guy is in the orange shirt just right of Mr. Leprechaun.

Post race. Complete with his hand in the bag of chips.

By the time The Tiger was done with his duties at the races, I was more than ready to go home. I was so happy to see tons of familiar faces. So many people I know where there, whether it was to volunteer or race in one of the four races. What a great family event!!

We headed home so I could eat more carbs and put my feet up, because, yes, it IS all about me. Bedtime was early. 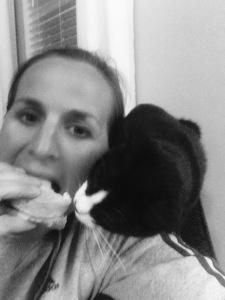 My typical pre-race burger. It never fails. Kitty wanted one too.

I normally eat four hours before big races. I’ve been doing it since I started learning more about marathons, and it’s never failed me. I’ve bonked ONCE during a race, and I knew exactly what I had done to mess it up. It’s never happened to me since. I got up at 2:30 to stuff my face once more.

I tried to get back to sleep, but my mind wouldn’t let me. At 4:something, I got back out of bed to get ready for the marathon. Would I be happy when I got home? Would I be sad? Angry, thrilled? You just never know with these things.

We dropped my car off at the finish line and headed to the aid station where my boys would be working, which is conveniently located right by the start line.  I got my Gu situated, used the port-a-jons about ten times, and I was ready to go.

I remember having some “oh shit” feelings because the weather forecast was off. It was already warm and the race hadn’t even started. It was 57 degrees and 90% humidity. Gulp. I do not run long distances well with temps above 50-55, especially with the humidity. Well, here goes!

The race started at 6:40. It was crowded, but it wasn’t where you’re stumbling and having to weave in and out of people. I think people actually seeded themselves according to the pacers, probably a first in any race I’ve done. At mile 2-3, I passed my boys’ aid station and called out to them. They had their music blaring, Clemson gear out in arms, and it was fun. There were a LOT of runners, which is something that I really like when racing. We headed off the island, and I noticed that I was soaked with sweat.  Grrrr. Of all the &(*%& days to be warm and humid. The course is a loop course, but it’s not even loops, so it’s hard to explain. We would be heading back to the island again, but first, a nice stretch of road with a lot of spectators and cool, funky aid stations, all college themed. You know, because it’s March Madness, the theme of the race. The NC State station had my friend, Alecia, dressed as Ms. Wolf, and the three times I passed her, she was dancing away. I hear her calves are strong as steel. I thought to myself, “I’m doing it”. (Thanks for the reminder, Judith!!!)

We went into the gated community of Landfall, a place I’ve only seen when visiting one friend and running through for this race. I had my times at certain intervals marked on my arm so I would know if I was on pace or not. Things were going according to plan, and at mile 10, I had 30 seconds on my goal time, 3:43. I met with a friend who would end up running almost the entire rest of the race with me, when I exited Landfall the first time. It was back to the beach.

I wasn’t feeling on my A game, and I wasn’t sure why. I knew it would be a test and that I was going to have to dig really deep to get my BQ that day. At the half point, I was one minute ahead of my goal time. Whew. I was sweaty. I was ready to do it. 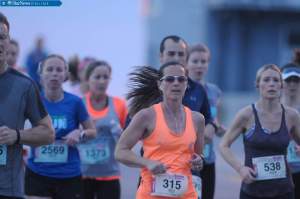 Runnin’ my race. You just can’t keep those thumbs down.

As you’ve heard me complain before, my Garmin does not like the clouds, so the readings for mine and my friend’s were all over the place. I could only run based on feel. I picked up a little goody bag at my boys’ aid station at mile 14-15. It had ibuprofen, salt pills, gu, a mini water bottle, and a new gum in it. I really struggled with getting my stuff out, so I asked my friend to get them out for me. There was a lot of swearing.  As I passed mile 16, I used some more colorful words and basically said that I was going to make this marathon my bitch. I had ten miles to go. Let’s do it. 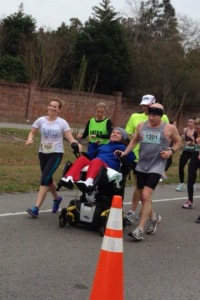 I have to mention that along the way, I came upon this group. The woman in the chair was paralyzed 26 years ago. She was a very young and extremely active girl at the time and was hit by a car. She and a friend decided the best way to celebrate life was to participate in a marathon. I had heard the story, and when I passed them, I told them they were amazing and blew them a kiss. Some good perspective. Because of chair issues, they were only able to complete 13.1 miles, but anyway, 13.1 is a LONG way.

We were coming upon mile 18, which is close to where you go back into Landfall. I had my goal time written on my arm. When I saw my time, fully expecting to still be a minute or more ahead of goal time, I

Then I realized that I was one minute BEHIND my goal time. I lost TWO MINUTES in those five miles.

Yeah. Needless to say, I sort of freaked. I was definitely feeling the weather. I FELT like I had been running a really good pace. My legs felt strong, but my breathing, eh, it was just not regular. When I brought my pace down, my heart rate skyrocketed and my breathing went with it. WTF?

Herein lies the confusing part. Maybe I spent too much energy trying to figure out what happened. But I felt defeated. I tried to speed it up. It wasn’t working. My body was like all

I knew I would not be able to pick up and get a negative split marathon, the one thing I was really counting on  and planning for the entire training time. My legs felt good though. I wasn’t sore. They weren’t tired. WTF? Honestly, I knew my goal time was out. I felt like I was running in pudding, or soup, or water, or something other than air. I FELT like I was running at a good pace, but the fastest I was actually going was too slow.

And I walked some. I adjusted my goal to be a sub-4:00 marathon. Nope. Gotta beat stomach flu marathon of 3:56, so my new goal became a sub-3:56. And I was REALLY upset. How could this happen? How could I lose two minutes in 5 miles? How could our watches be off? How could I LET this happen? How could I waste this opportunity and sacrifice all the sacrifices that my family and I have made for this dream of mine. Then there’s the other side of me. I am freaking running a marathon. Ain’t no shame in that. So it’s the Libra side of me that pulls me on either side, the one that divides the happiness with “you didn’t try hard enough”. And I kinda wanted to punch it in the face that morning.

Almost to the finish.

And I saw my family, my boys, the ones who are always there for me. I saw so many of my friends who yelled my name. And strangers were yelling my name too. It was confusing earlier since I was like, “how the heck do they know my name” and dur, it was on my bib.

Official time is 3:52:28.With all the walking I did, it ended up being an 8:53 pace. An 8:50-effing-3 pace. So with that, come mixed emotions. I really needed to sit and think for a day, let the weekend digest and see where it went. Yes, I’m REALLY disappointed. I’m confused.

I’m also very proud, I’m happy. That’s a REAL smile. I ran a marathon. Sure, it wasn’t the pace I wanted, but I sure gave it a hell of a try. So I let my disappointment marinate for a day, and now I’ve moved on. I loved this marathon. I love having goals to shoot for. I loved that my friend ran with me. I love that I saw TONS of people I knew out on the course, that my boys were a part of it too. I loved that my friend made sure I had food, even though I didn’t want to eat. I LOVE the fact that my friend, Amanda, who I met because of this race,  KILLED her race and got her BQ by almost SEVEN minutes. It’s about family, friends, goals, energy, and living life. Next year, I’ll be back.

But first, I got me some Ironman to do.

What do you think about marathons? Love/hate? Time goal/no time goal? Do you like all my new animated gifs?