Shouting Out and An Unexpected Century Ride

I have raised money by running marathons, and it’s hard. It takes a lot of time and work, and I admire those that do so, especially when the “prize” is running a marathon. Of course that’s a good thing for many of us, right?! Paul from Running Wild  (whom I call “Raleigh Paul”) decided to raise money for the James Blake Foundation, which raises money to help find a cure for cancer, to run the New York City Marathon. And if he meets his $3000 fundraising goal, he will drive several extra hours and bring his dad to the race. How cool is that? (Here’s his post with the link to the fundraiser.) I told him I was going to donate several months ago, and because of several financial surprises (don’t we all just LOVE those?), I put it off. FINALLY, I was true to my word and made a donation to his cause. It just so happened that during the time of my donation, any donation over $10 included a free headband from Angie, one cool runner chick and MarathAng blogger from Iowa (and a Hawkeye fan – BONUS) who makes a large variety of headbands. I said that I’m not a big headband wearer and that I was going to donate a long time before, so just don’t bother sending me one. Of course they didn’t listen, and a few short days after my donation, I got a really pretty headband in the mail. 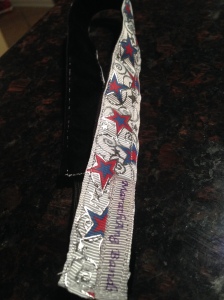 Very cool! No slipping and three sizes to choose from.

I figured I would give it a try, and I ended up really enjoying it. I have a lot of “flyaway” hair, especially when I run after biking (those pesky helmets!), and it really holds them down and away from my face. Angie’s band stayed put, wasn’t too tight, and wasn’t too loose. I didn’t have anyone to take my picture the morning I wore it, so this poor selfie is all I have to show for it! Hello widow’s peak! 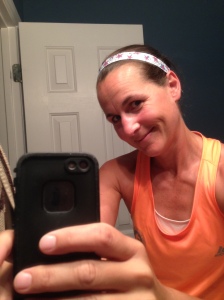 So thank you to Paul and Angie for making the world a better place!

I’d also like to spread the word on the best sunglasses, EVAH, PSI Sunglasses. They’re so light and comfy, AND they have some amazing customer service, which is why they’re getting this shout out.

I got my first pair of pink/white glasses back at the Houston Marathon expo before my BQ, and I knew I was on to something good. I couldn’t ever find them at other expos and then I FINALLY realized that I could simply Google PSI and find them. Poof, a pair of black/gray sunglasses arrived in my mailbox a few days later. I wore them almost every day, for long runs, biking, beach-going, EVERYTHING, and finally, the lens started to crack after almost a year of constant use, probably from being crammed into my teeny purse time after time. The frames, however, still remain perfect. They’re the bendy kind, and they’ve survived longer than all but one of all the sunglasses I’ve ever owned.

I thought I would try a different style a few months ago, and to make a long story short, they didn’t work with the structure of my face. I decided to go back to my trusty Mercury, and due to the patience of their staff, USPS, and email, a shipping snafu, I finally got my new and upgraded (fogkiller AND polarized this time) glasses on Friday. I’m in love again. I’m not getting anything for this shout out, but check them out and see if you can find a pair that work for you. They’re so light and will withstand daily use for a very long time.

So here’s the deal on my workouts this past week. They’re getting longer and some of them harder, but with a gradual approach, it’s almost hard to tell.  I’ve really enjoyed most of them, although the heat/humidity has made enjoying running past five miles very sloshy and sort of gross. I’ve never sweated so much, even when training in Houston. I pop salt capsules like candy.

My swims have been, um, well, they’ve gotten done, but I’m seriously struggling with doubt. I keep telling myself there’s no room for doubt when you’re training and there’s no point of it either, but it creeps back in. At the end of the week, after wondering, AGAIN, why I signed up for an Ironman that has a friggin’ ocean swim, my coach sent me a “kudos” email, mentioning that I had swim 8000 yards in one week. I almost fell out, since even a few short months ago, I wouldn’t have ever thought that possible. Right after that, I saw this on someone’s post, and I knew it was a sign to remember the process and to trust in my training. 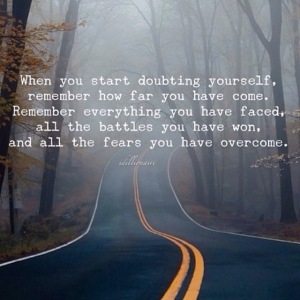 I am reminded that two years ago, I couldn’t swim 50 yards. I probably couldn’t have swam 25 yards honestly, and here I am, swimming 45 minutes or more at a time. It IS a process, and it takes time, physically and mentally to get to where you want to go. It’s very hard to be patient, especially when you want to go FAST and you know there’s a clock ticking, waiting to crush your dream if you don’t get there in time. But I have to remember this, I have to be patient, I have to work hard, push myself, and know that I will be successful in my goal.

Instead of enjoying the PERFECT glassy conditions, I fussed over my goggles, worried about jellyfish, and obsessed over how slow I was going. Not exactly being productive there, am I?

My running has been going well, and even when it’s completely gross outside, I’ve been pulling down sub-9:00 mile long runs. And that’s because of the bike. Oh, the bike.  The bike is a challenge to me. I enjoy riding it, but I’m not exactly fast. That’s ok with me. I’m not in this Ironman to win it. Obviously. But I get slightly frustrated sometimes when my legs can’t cash the checks my mind writes. I’ve had some very good interval workouts, one being a ten minute warm up followed by 16×1:00 at FAST/HARD with a 1:00 rest, then cool down. It seems simple, but in reality, this workout is a killer. I loved it. I almost died in the process and my kids probably thought someone was killing me with all the groaning that occurred at about 45 seconds in to the minute, but just like a good tempo run or track workout, this energized me the same.  I even saw 27 mph for about ten seconds on my LAST hard minute. I’ve NEVER seen that except in my car!

Sunday was my long bike ride at 4 hours or 70 miles, which was my longest ride of the season and the longest in decades for me. I met up with a very large group early on Sunday, and I immediately knew I was out of my league. All the super fast riders (20+ mph) were there, and I felt like a little kid.

We all set off, and I ended up behind a guy I didn’t know and a friend of mine. The other big group slowly pulled away from us, and the three of us went on our merry way, going at a decent pace. I felt it was the perfect pace, not enough to burn up my legs, but where I was working. Since the other two had 100 miles and I only had 70, my friend told me part way into our ride, after being chased by a huge brown  dog that could run over 20 mph and gave us a good adrenaline rush speed interval, they would take me back to the start since they DO NOT LET BIKER FRIENDS RIDE BY THEMSELVES. At that point, as I’d already been thinking it, I told her that I would just ride the entire 100 with them since their pace felt manageable and I didn’t want them to have to go back and loop, especially since she told me she wanted to go out 50 and back 50.  And it was only 30 miles more than what I was going anyway.

I’ve never ridden 100 miles on my bike before. I’ve gone somewhere near 90 back when I was in college and rode RAGBRAI, but never “the century” ride. I felt a sense of adventure, of pride, of happiness as we ticked the miles off. We stopped at a few places to grab some energy, pee, and went on our merry way. It WAS an adventure, and I had two great partners along the way. There were no major incidents (only a minor one where if I was a guy, I’d be singing in a very high octave), no chafing, no getting sick, nothing bad besides the dog chasing scene. It went off without a hitch. Was it too good to be true? I guess time will only tell! 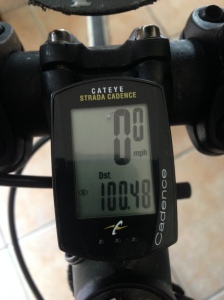 When we finished, I got a picture with coach, my little “tri” group, and headed straight towards Panera Bread, the place I had been dreaming about for quite a few miles, mostly to get “the largest Diet Coke (that ended up being an ok Diet Pepsi) on the face of the earth”. It was delish!!!!

Thanks so much to Lori and Billy! They are the BEST riding buddies EVER!!!

And now, I’m heading out of town for a few weeks. It’s crazy, trying to get yourself, husband, and two kids out of town, coordinating house sitters to take care of pets and watch the house, packing what you need but not too much, coordinating who you’re meeting, when, and what days. We are visiting my parents and then touring my old stomping grounds in Iowa, including Field of Dreams, and visiting lots of friends. I won’t be training the same as I have all of June, but I’ll be getting in plenty of shark-free swimming in Table Rock Lake and running lots and lots of hills. Perfect.

Do you ever have moments when you question your abilities? How do you deal with it? What’s your breakout workout??

12 thoughts on “Shouting Out and An Unexpected Century Ride”