It’s Getting Sharky In Here

Boy, did summer come in with a vengeance this weekend. Mid-to-upper 90’s and lows in the upper 70’s. To quote Paul from RunningWild, “Satan is sitting his ass crack smack dab in the middle of North Carolina”. That pretty much sums it up, but I have to be thankful the humidity is lower than usual, although just going outside makes you feel like you’re visiting the surface of the sun.

Things have been crazy busy, good busy, training is going well, and my kids are out of school. They both got straight A’s for the entire year, and I am so proud of them. I did remind them why I bugged them so much about doing homework. 🙂 This week, they’re at their grandparent’s house, so I have a HUGE list of things I want/need to get done while they’re not here. I’m not doing well with my list so far.

I had to do a little dance when I got my Inknburn Boston Jacket in the mail the other day. I immediately put it on and hoped for cooler weather so I could wear it. That certainly isn’t going to happen anytime soon (see above), but one can hope.

I’ve been enjoying my swimming, although I had a bad swim the other weekend, due to expectations not meeting reality. I thought it was going to be 1.2 miles with a significant current push, but it turned out to be 1.4 miles with basically no current push, and at one point, it was a current push in my face. It can get frustrating when expectations don’t meet reality, can’t it? I beat back the negative thoughts in my head for a few days before I was “back to normal” again. I do not have time to second guess my swim. There’s no room for it in my training plan, and just as there is in running, there will be bad swim days. Just do your work and move on. That’s what I keep telling myself anyway!

Finish Line of the swim race.

My running has been going very well the past few weeks. I’ve been pulling out some impressive times in speed work even with the increase in temperature, and I think it’s mostly due to the work on the bike. It happened last fall when training for the half iron, so I suspect it’s the case now. I’ll take it! I’ve been riding 60 miles on the bike most weekends, some faster than others, and I’m putting in some good interval work during the week. I honestly think coming into Ironman training after a marathon was good timing. I’m also hoping going into marathon training after Ironman will prove to be a good thing too.

I’ve had the pleasure of seeing some of the most beautiful sunrises the past few weeks.  I’ve gotten to know more people through the school, training, running, biking, and swimming. It’s a trip, and I am finally feeling back to myself after several years of stress and moving. I feel settled, feel happy, feel lucky, and grateful for the life I have full of amazing people.

We’ve had a few twists this week. Friday, my friend and I went for a long open water swim in the channel. I made her swim under the bridge (mostly because I missed the boat on where everyone else was starting, but it really did turn out to be a good thing), which she HATES because there’s trolls who live under there and lots of fish hang out in the dark, shaded water. They might be drug dealers, but no one knows for sure. Not long after we successfully swam under the troll bridge, she told me she saw a jellyfish. Ok, that’s cool. I’m down with that. But I wasn’t. Totally wasn’t. At all. The first time I saw one, and you have to know, this was my first “wildlife encounter” during a swim besides seeing those teeny little fish and a skate along the shore, I screamed and started splashing around like a 2 year old. I immediately thought that I would then attract sharks, because they like noises. But I couldn’t help it. I knew these jellyfish were safe and didn’t sting, but it was the thought of it that freaked me out. Things kept bumping my feet, and when I saw one, I tried really hard, but I couldn’t help but jumping a little under water and coming up for air. 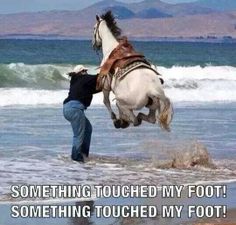 I may have let out a few “OMG” or possibly a “Oh, FUCK”, but it was my first wildlife encounter!!!! Then it was like they were everywhere, bumping my feet, getting allupinmybidness. I couldn’t go ten feet without seeing one and I told my friend, “Hey, that’s enough, I’m out.” She guilted me into finishing my workout with a simple, “You’ll regret it if you don’t finish your workout”. Needless to say, I got in some extra cardio with that jellyfish swim. But we got it done, 1.5 miles in 50 minutes, with lots of stopping, screaming, splashing, talking, troll-watching, swearing, and a good push from the current, THANK GOD.

We felt like they were out to get us, laughing and texting all their jelly friends, “Look, we’re making them scream!”

Some other people we knew swam by and I heard a random, “OMG” and “What was that?”, and one of them ended up getting out of the water too. I don’t know how many kinds of jellyfish there are, but one of my friends got stung, I was freaked out by just seeing them, and they were just everywhere, scaring the crap out of us swimmers. I was ready to get back in this week. Until this weekend happened.

We all KNOW sharks live in the ocean. We all KNOW they have to eat. They’re misunderstood creatures, thought to be scary and evil, but they’re just sharks doing what sharks do. I like to pretend there’s some netting, really good netting, or gates at the entry of the waterway where larger fish, except for dolphins of course, cannot come through. It’s like a gated neighborhood. When the hoodlum wants to come in, access denied. But this weekend, on three separate occasions, people were injured by sharks. One was not a major injury, but two of them were. All of them involved kids, and two of those kids will have at least one amputation because of the shark bites.

And people, this happened in my neighborhood.

I swim at Wrightsville Beach, I take my kids to Kure Beach and Ft. Fisher, which is at the southern end of the island, and good ole’ Mr. Shark was chewing on people at Oak Island, barely around the corner.

That’s a little close for comfort. I believe the bites happened near a pier, which makes complete sense considering there’s bloody bait at the pier from fishermen WANTING to attract fish, so I do wonder why they were swimming so close to it. Then again, I have too. And I was going to on Wednesday for an ocean swim lesson in prep for Ironman Florida. I’m not now.

So there’s been a lot of shark jokes thrown around, but when there’s three bites over a weekend really close to home, which defies the odds, it’s time to maybe just be a little extra cautious. I assume two of the bites, and even all three, were from the same shark, but you just never know. I’m not willing to take that chance, especially when, according to one of my coaches, shark attacks occur more during a new moon and a heat wave, two things that we have going for us right now. As for open water, I’m finding out from OTHER people what the jellyfish situation is. Depending on that, I’ll see if I want to swim in open water or head to the pool. As for now though, I’ll just keep assuming there’s some big gates filtering all the sharks from coming into the waterway, and if they slip through, they’re just little guys like this: 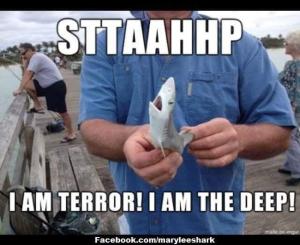 Or that they’re just trying to help:

14 thoughts on “It’s Getting Sharky In Here”