There’s Something Satisfying About Being Completely Exhausted

Posted on February 23, 2015 by Running Boston and Beyond

It still sounds like I’m plugging my nose when I talk, but at least my ears have started to pop and I can hear again. It’s funny that you don’t realize how much you can’t hear until you can actually hear again. This weekend was a doozy, in a good way. I think I need a vacation from it. Nah, just kidding, it was a really good weekend.

My Friday night ended with my family watching Monty Python and the Holy Grail (“It’s merely a flesh wound”) and me dozing on the couch and finally calling it a day.  At a whopping 8:45, I headed to bed.  I felt like total crap. I had a big weekend planned so was hoping to get a good night sleep and wake up all bouncy and fresh.

I didn’t wake up bouncy and fresh, but I woke up feeling better on Saturday morning, thank goodness. I had to get up early to get a good 6 mile run in. I checked the temp and it was 20, a tad warmer than Friday but without any wind. I layered up and headed out, hoping to get a few tempo miles in since I missed them last week. Man, it was cold. Yes, I know, North Carolina’s version of cold is very different than many, but 20 is literally freezing, so I  stand correct when I say it was FREEZING. 🙂 The first mile felt good and I didn’t have a cough, so I picked up my pace and ended up with a mile at around 7:10. I rested about 30 seconds and started jogging again. I slowly picked it up and after a half mile, went for another fast mile, this one closer to 7:00. But I didn’t feel great after that. My LEGS felt fabulous, but the rest of me needed food. I hadn’t eaten much in over 12 hours, so I decided to just finish the rest of my run at a decent pace and not push it anymore. I was HUNGRY. 6.2 miles at an average 8:21 pace. Not too shabby.

I had enough time to get cleaned up, eat my smoothie, and get my stuff together for the swim clinic with Sheila Taormina. I was a little nervous, but this was just the classroom session, so at least I didn’t have to worry about snotting all over the pool. The first two hours was in a conference room where Sheila discussed the science behind the swim strokes and why we have the stroke we do. Or at least the one we should have. Basically, the entire time was discussing what to do with your hand/arm when your hand slides into the water until it comes out of the water. There wasn’t much talk about kick or anything else for that matter. I found it fascinating and I learned a TON. Now for translating that into being able to actually DO it. We then had a tubing session (I was disappointed there was no lake, boat, or tube) where we practiced our newly learned stroke with tubes that provide resistance. She looked at each one of us individually and told us anything we should be doing to correct it. Ok, I could do it right OUT of the water, so I was happy. I was SO GLAD I had the opportunity to attend this clinic.

I came home all excited to be able to swim better and MORE EFFICIENTLY. I yammered on and on to my husband as I showed him my new practice tubes and Sheila’s book. I’ve wanted to buy swim books before but didn’t because they didn’t make any sense to me. I didn’t even know what the swim term “catch” was before Saturday. Now that I understand what she’s talking about, I’m guessing the book will be helpful as I gain skill and check with the book THAT I NOW UNDERSTAND to be sure I’ve got it right. She even signed it for me. Ahhh, my brush with fame.

Finally, a swim book I can understand.

A few hours after I got home from the clinic, the entire family headed to meet a few other people at the theater to watch McFarland, USA, probably one of my new favorite movies. It’s a true story about a coach and his immigrant cross country team and what they go though.  It’s about hard work, it’s about perseverance, it’s about going for your dreams, it’s about family, it’s about trust, it’s about RUNNING.  My only advice is TO JUST GO SEE IT. It’s a Disney movie, so it’s kid safe. My personal favorite part is at the end when they show the real coach and team and where they are now.

After the movie, we went to dinner with a friend and his kids, and by the time we got home, it was pretty much time for bed. I had to get up early for my 12 mile run and then 2 hour swim clinic in the pool, so I appropriately fueled on popcorn, wings, and beer, then headed to bed. 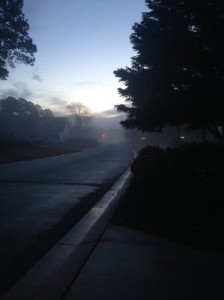 Sea fog, or at least that’s what the weather people were calling it.

Sunday’s weather was weird. We went from cold and static-y to warm and damp. I even wore shorts and a t-shirt to run in, and it was soaked when I got done. I met with a group and ended up running with someone I didn’t know. Evidently, my pace pushed her, and it was great to get to know someone new. I would have like to maybe go a little faster, but when it was all said and done, I ran 12 at a sub-9:00 pace and it felt good. That was exactly what I was supposed to do, so I was satisfied AND got a friend out of it. A friend who has done TWELVE, yes TWELVE iron distance races.

Nice and calm for the run on Sunday.

I got home, ate a smoothie, and got ready to go to the pool.  What do I say about the pool session? Difficult? Yes. Annoying? Yes. Tiring? Yes. Amazing? Yes! This is where we put into practice what she was talking about the day before, PLUS the other parts of the stroke. We did drill after drill to drill the proper form into our muscle memory.  I mustered to the end and was literally shaking when I got out of the pool. Can you say, GOOD WORKOUT? Holy hell, I learned so much and was exhausted! But this is the first time I’ve EVER been exciting about swimming.

Learning at the pool.

Not long after I got home from the session and ate my weight in lunch, the family took advantage of the warm weather and headed to Carolina Beach State Park. We walked the trails, explored, and had a nice time outside IN OUR SHORTS. The poor dog was so tired from smelling absolutely everything possible, she crashed as soon as we got home. I gave my kids hair cuts and then made Mexican pizza for the first time (I seriously was missing something because YUM), and we hung out, watching some TV.

I was tired. Damn dog tired. But doesn’t that feel good? Isn’t there something to be said for being busy, doing all sorts of new and fun and difficult things? I think so. And now it’s Monday, I have a HUGE list of things to do to make up for my time off last week and my youngest son’s birthday this weekend. Funny, 9 years ago today, I couldn’t bend down to tie my shoe because of my ginormous belly fully of baby (and about 45 lbs of “other”) and today, I’m a month out from running a marathon. Of course the weather is off her meds again and it was rainy for my run. It wasn’t one of those pelt you in the face, make you miserable, wish you were on a treadmill rains. Yet. Hello, cold front. This morning’s temp was the high for the next few days. Blech. 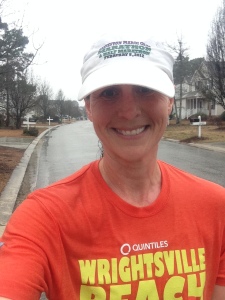 What did you do this weekend? Even been to a swim clinic before? New song: The Creator by Pete Rock and CL Smooth – it’s in a pretty cool ad, which is how I found it thanks to Shazam.

6 thoughts on “There’s Something Satisfying About Being Completely Exhausted”