Sometimes It’s Good To Not Have A Choice

Posted on February 17, 2015 by Running Boston and Beyond

I guess I had a choice, but I wasn’t giving myself a choice on whether or not I ran on Sunday. And after looking at so many other posts about the polar flavored air up north, I feel a little bit whiney. But Sunday was cold. And I had 20 miles to run.  And I didn’t have a choice to do it or not. I HAD to run.

So let’s back up to Saturday. I felt like I had been fighting off a cold since Thursday. Seems many people are getting something, a cold, the flu, something. I was extremely and unusually tired on Thursday evening, so I knew my body was trying to fight off some sort of bug and I had been exposed to about a zillion different viruses at the airports and planes full of sick people on Monday coming back from Vegas. I felt ok on Friday, but again, felt pretty tired for no apparent reason. I set my alarm for Saturday morning at 6:30 so I could get my 10 mile pace run in, and when the alarm went off, turned the alarm off and went back to sleep. For TWO MORE HOURS. Holy cow, when I woke up at 8:30, I was sort of pissed, sort of happy. Happy because I got the sleep I evidently needed. Pissed because I was just getting my lazy ass out of bed at 8:30 and had 90 minutes of running to do.

Saturday morning was cold, but the sun was out and it quickly warmed up. I started my run and immediately knew I was overdressed, so came by the house and changed. Another mile later, I swung by the house again and changed again, into shorts and t-shirt. It was almost hot. Several f-bombs later (I should have effing started effing earlier then I’d be effing done with this effing workout), I was ready to finish my 10 miler. I had a shitty attitude, and I didn’t want to run, I just wanted to make heart-shaped pancakes for my boys and drink coffee. I know myself and I’m not one to skip workouts, so I effing got out there and got it done. My stupid watch pace was all over the place, so I quit looking at it and tried to dial in race pace on my own. Two costume changes and 85 minutes later, I was done. Whew, race pace dialed in at 8:22. THAT is why I do my workouts, even when I don’t want to. They always feel good when they’re done.

The weather was pretty nice on Saturday, but the cold was coming. I had tried to change the long run to Saturday, but my friend couldn’t so I knew I had to get it done Sunday. It was going to be super windy and cold. Yes, all you northerners, cold is a relative term. Many of you would probably LOVE 20-something temps, so I apologize for my whining. Honestly, I don’t mind the cold. It’s the freaking wind that I hate. I HATE WIND.  I had my pre-long run and pre-race burger on Saturday night (delish) and got in bed all hydrated and ready to brace for what was coming the next day – 20 miles in the cold wind.

Wasn’t too crazy about the cheese on the pasta, but the burger was goooood. Goldie is in the background.

I woke up and it was just crap out. I felt fine, so I was happy about that, and I was meeting other people, so I knew I couldn’t get out of it, delay it, anything. I knew I had to just get out there and run. It was almost a relief to not give myself a choice. I had asked a friend/coach to run with us too, and she is the one who always seems to push my pace on long runs. She’s my dangling carrot, so to speak. I didn’t know if I could keep up or if she would care about pace on a crappy day, but I knew it would be good to have a group to run with. I brought all my clothes, got my fuel ready, and headed towards the beach. I don’t think I even pushed the gas pedal beyond a tap the entire way there. Wind. When the group of ladies was all there, we headed right into the 25 degree, 25 mph wind. We knew it was better to head into it first, but man, it was effing cold. My face, hands, and toes were cold. A few miles later, we headed into an area that’s more sheltered, so for the rest of the 12 mile loop, it really wasn’t bad. The last few miles getting pushed was pretty awesome. Some of the ladies were done, so three of us headed out for a 6 mile loop. It was so nice to talk and chat and keep our minds off tired legs and how many miles we had done/had left.  It wasn’t “conversation pace” but maybe “labored conversation pace”, but I never checked. Soon, 18 miles were done and the two ladies remaining were done. I had two to go solo. I ran towards the beach and felt pretty good. Wow, 8:05 minute miles at the end of a 20 mile run? Hmmmm, fishy. Yup, I was getting pushed by the wind, but I was also happy to be feeling good. Until I turned around. Yikes. “One more mile” and “I can do anything for just one mile” kept going through my head and some other thoughts like “this is bullshit” and “FUCK” were sprinkled in. Mom would be so proud (sorry mom, it’s dad’s fault). But I got my run done. When I met with Amanda, who waited for me to finish, she told me we were rocking our paces. Holy cow. I didn’t give one thought to pace because of the weather, and it turned out to be one of the fastest 20 milers….ever. And I was so worried.

20 miles, DONE. And you can see my cat’s tail back there too.

20 miles at 8:35 pace? Pretty damned awesome if I do say so myself. I was thrilled and it boosted my confidence for the race. 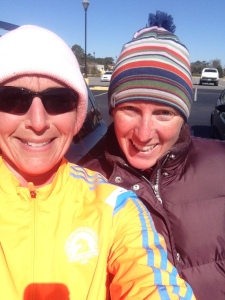 Me and Amanda – evidently my face froze into a strange look during my last mile.

After hugging Amanda, I passed up stretching and immediately got in my car, turned up the heat, turned on the heated seats, and headed home. I did NOT want to get cold, as I knew it would take me several hours to warm back up if I did, and I was afraid I would be more susceptible to that little bug I’d been fighting. I have a few friends who swear by Ultragen recovery drink, so I drank a bottle on my way home.  I didn’t get sore the day of my last 20 miler and this time, I didn’t get sore either. I blame it on Ultragen, so that’s my plug – drink it and you won’t be sore when you run 20 miles. Really though, I like the way I feel after I drink it and it really does seem to curb the soreness that’s been normal for me.

I had five easy miles on Monday for a recovery run and decided to, again, ignore any pace on my watch and just run. It ended up being a sub-9:00 mile, so I guess that’s good.

Today, I was planning to do three 2 mile repeats but again, the weather was just not looking good. The cold that was trying to overtake me was not overtaking me, but was trying to settle in my chest/lungs. It was cold, windy, and wet out. 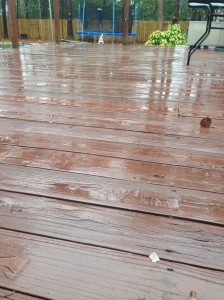 My back deck. Yuck.

I asked some peeps on my Facebook page if it would be pansy or smart for me to stay in and have a tempo ride on my bike, and the response was overwhelming to ride my bike indoors.  So that is exactly what I did, and it was a good ride. I warmed up 10 minutes, then had four 7 minute repeats at Z4 with a 3 minute recovery (the 4th was a full 10 minutes at Z4), ending with a 10 minute easy recovery. I did run a little with the kids as they had their running practice after school since the rain ended and it dried up for the most part.

Tomorrow is an easy 5 miles and then Thursday, bum bum BUMMMMM, the 2 mile repeats. And the high is going to be 29 (really, super cold for us here). I’ve already planned to meet Amanda and get these cranked out, so there’s no excuses.

It’s been a good week of workouts, the marathon is in LESS THAN 5 weeks now, and I’m feeling good. Of course I’m nervous, but I’m ready to get my work in and see it pay off. I haven’t been able to get to the pool (that’s a story in itself so I won’t even start but I really wish it was warm enough to open water swim), and my swim clinic is this weekend. Exciting!

Anyway, if you haven’t already, check out my Running Boston and Beyond Facebook page (and hopefully LIKE it) HERE.