Saturday morning, I ran the half marathon called The Scream. It’s mostly downhill – I think 2100 ft descent elevation, and boy, were my legs a screamin’ Sunday! They hurt a lot on Monday too. Thankfully, my friend Renee, learned you can go down the stairs backwards to minimize the pain. It’s literally more painful (not as tired of course, but it hurts a lot!!!) than after running Boston.  And that’s bad. Here’s the recap.

On Friday, my family and I took off towards the “mountains” of North Carolina. We were more in the foothills than the mountains, but anything over 50 ft elevation is pretty high compared to where we are here in Wilmington. I could barely breathe in that air up there. No, just kidding, my ears popped a few times, but other than that, I couldn’t tell. I was super excited since we were staying in a cabin with some VERY cool people, and my plans were that I was to become one with nature after the race. We were going to explore. We were going to walk in the woods, let the dog run around and sniff all she wanted to, and we would not shave.  We were to be rebels.

So as we rolled in on Friday, it started raining. We went to bed with the rain tapping on the metal roof. We woke in the night to the rain tapping on the metal roof. We woke up to (bet you can’t tell what’s coming here…..) the rain tapping on the metal roof. Hmmm, yet another race in the rain. We were staying in a cabin with my friend Renee and her family, and three other very cool girls were staying in a cabin on the same property. It was really nice that one of them, Paige, didn’t even swear around the kids. Bonus, I didn’t either. We drove to the location where we were to catch shuttles to the start and then where the after party would be. Rain, rain, and more rain. Yuck. Once we got on the shuttle (a big yellow school bus), we wound up the hills for about 30-40 minutes to the start. We quickly got our bibs and timing chips and headed to the can for one more pit stop.  I’m glad we had gotten to the shuttle early, as we barely had time to get our stuff and go to the bathroom before people were headed to the actual start line around the corner from where we were dropped off.  And it’s not like there were hundreds of runners either – the race was capped at 350 runners and I know there were some who stayed home due to the rain. But we didn’t. 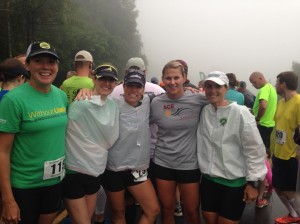 Before the start, and before Sharon’s dinosaur hands came through her plastic bag/poncho. 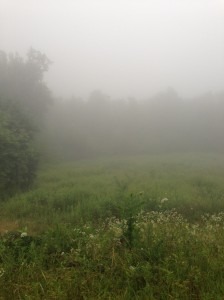 Looking right from the race start.

The race got started about seven minutes late, but with all that rain, it wasn’t terrible. I think I would have felt rushed had it not started a little late, and we were where we needed to be in plenty of time. I’m not really sure what would have happened had we not been so early. I guess we would have been late.  Anyway, when the gun went off (or it was just a guy saying, “GO” but I honestly don’t remember), I had in my head that I wanted to do about an 8:30-9:00 minute mile pace. Then something snapped. Yeah, that competitive thing came about. This race was just supposed to be for fun. Ok, so how many of you are nodding your head in understanding right here? Yeah, right. NOT be competitive in running? Fat chance. I didn’t even stop to take a picture of the course because that would have slowed my time by, like, maybe TEN seconds!  I started that way and really, running down a hill is pretty awesome. I knew I was going to be sore and all that and I didn’t care, but it was so fun!!! The first few miles were UP hill, and when we went from the road to the hard-packed gravel trail, it started going down. Don’t you just love that? You can go faster with the same effort!!! It was awesome. It was a SCREAM. Then I started to get passed. I don’t understand, as I was letting the gravity pull me, and I didn’t fight it. But I kept getting passed. It sort of irritated me, you know, because this race was supposed to be FUN. I actually thought I might be last, but I didn’t turn around and check.  So on the up hills, I did what I normally did, which is to keep pace. I didn’t slow down. And that’s where I got my sweet revenge in my FUN race, I passed tons of people on the little bit of up hills we had.

The miles pretty much flew by. When I was out of breath from running up hill, we went back down, and my breathing relaxed. It was fun. The terrain wasn’t bad, even with the very wet conditions.  I didn’t have music and I didn’t run with Renee as I planned to, so I kept myself busy by planning my path around the corners to cut all tangents, not falling, and enjoying myself. I did get pushed once at a water station because I slowed down. Then this RUDE guy just pushed me out of the way. I called him an asshole but evidently, he didn’t hear me or didn’t care. I ended up passing him so he can suck it.

My paces were staying pretty close to 8 minute miles, and I was thrilled. My Garmin was off quite a bit from their mile markers, which I expected, but whatever, it was fine. Then I got to mile 12, the longest mile on the face of the earth. This is what I think happened: The course is certified and they know the beginning and the end. They marked the middle miles using THEIR Garmins, and at the end, they were short, so they just made the last mile twice as long. Seriously, it was a mile and a half long. No joke. I was losing my patience, my shoes were sloppy wet, and I was tired and wanted to be done. That friggin mile just wouldn’t stop. Around the corner? Nothing. Around another corner? Nothing. No one. I almost stopped, but then realized that would be just stupid, so I kept going. Then there it was. Mile 13. Then .25 miles later came the finish line. I seriously don’t get why it was so messed up at the end, but I think the actual total mileage was right on. It just wasn’t nice to make the last mile so long.

I finished in 1:46 and was pretty happy, although I was close to a PR2 if the course would have been marked accurately. Well, in my mind I was headed to a sub 1:44, which wouldn’t make it a PR, just a 2nd place to a PR. (My actual PR is 1:40.)  When I crossed the finish line, I got some water, and stood in the rain. A few of us from the Without Limits group had a picture taken, and I thought it was really cool the faster cats waited for the rest of their friends to finish before they headed to the bus to get back to shelter. Unfortunately, I don’t know most of them yet.  I ended up getting really cold and wished I would have worn different things at the beginning and saved my water proof jacked for my bag at the end. Oh well. 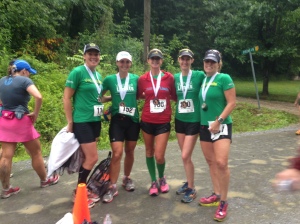 At the finish- Renee, Me, Shelley, Sharon, and Paige. All of them are really cool chicks.

Once everyone finished, we headed to the bus and they trucked us back to the place where my family would be. They had some REALLY good BBQ and other eats there, and once the awards were done (only 5th in my AG), we headed back to the cabin for a HOT SHOWER. It was still raining. 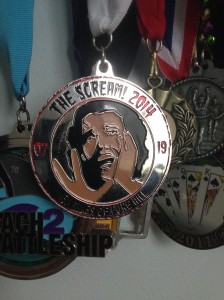 My hair was a rat’s nest. Big mistake in not packing my de-tangler. Ouch. 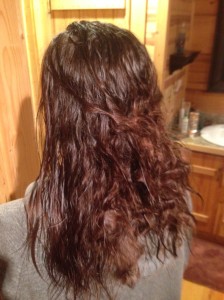 Left side was brushed out, the rest, was not. Complete rat’s nest.

The rest of the afternoon was spent eating, drinking, resting, relaxing, and then finally, the skies parted and I took my one son and dog outside to explore. It was awesome.

The next day, we went exploring in the river on the property where we stayed, and it was more than awesome. I grew up doing that sort of thing, being one with nature and all, and my dog, kids, and husband were having a great time. We are going back to that place, that’s for sure.  Unfortunately, we had to leave pretty early to get back home in a decent time.

As for the race, I really enjoyed it!!!  I was a little sore while running, and I was concerned when my knee starting bugging me in the same place it started hurting the last few days of my 10×10 Challenge. But then that went away, and I felt good. It was something new, something different, and it was nice to get out and be somewhere hilly for a change.  There’s a full marathon on that same course, and it’s very tempting to try and BQ on that one. I’m not sure if I could run that fast down hill for a full, mostly because I have ZERO hills to train on, but it’s definitely worth considering. I’m hoping I won’t have to worry about that though.  We are planning to go back to The Scream next year!! 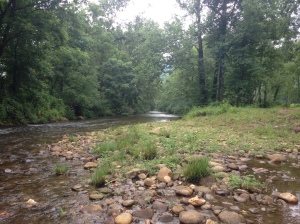 As for what I’m doing this week IF IT EVER STOPS RAINING, is to swim, bike, and run. I’ve GOT to get back to tri training since it’s coming down to only three months until the half iron. I was going to blame the rain and my hurtin’ legs on not swimming today, but honestly, I just didn’t want to!  As for me now, I’ll just keep stretching these legs and complaining as I descend down the stairs. Ouch, ouch, ouch, but it was totally worth it!