I Want A Unicorn That Farts Rainbows

Posted on March 6, 2014 by Running Boston and Beyond

Because then I would have a unicorn and I could point it at negative people and shower them with happy unicorn rainbow farts. It would be like that water sprayer I use when the cats get on the counters. 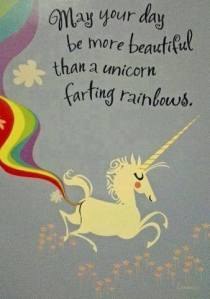 I don’t know if it’s the crappy weather that is clinging to us all like dog poo on a shoe, but there’s a negativity halo all over the place. I’m so sick of negativity.  I am desperately clinging to positivity and being happy, and thankfully, it’s working.  It’s like when you pick up a big pile of clothes to be washed, a sock falls out of the pile so you bend over to pick it up, but when you pick it up, a pair of shorts falls out, so then you pick those up and in the process, a different sock falls out, so what do you do?  Do you just keep picking things up, go get a laundry basket to put all the dirty bastard clothes in, or do you just leave a trail of socks and shorts along your route to the washing machine and then make another trip to pick up all the clothes that were jumping suicide out of the original pile?  You can get aggravated about it, or you can just laugh.  I’m choosing to laugh.

I know everyone has one of those whistle-in-your-nose kind of days. I get it.  But enough is enough!  My kids are whining a lot and my dog and cats aren’t getting along. There’s whining, growling, hissing all freaking day. The dog wants out, wants in, wants back out, wants in….. The cats growl when the dog is within one square mile of them.  Well, considering my house isn’t the size of Tori Spelling’s childhood home, my cats are AL-WAYS growling at the dog. The kids.  Oh, the kids. Homework?? You’d think they just started school yesterday.  Cleaning out lunch boxes? You’d think they hadn’t gone to school EVER and knew that it’s time to clean out lunch boxes and do homework when they get home.  And that magical time of evening when those mean parents say, “Time to get ready for bed!”?  You’d think this is the first time EVER that they needed to go to bed before midnight. I mean, after over 4,000 nights and 11 years, you’d think my oldest might actually expect that around close to 8:00 pm, it’s going to be time to get ready for bed. Evidently not and it’s still a surprise, complete with the whole body roll and the UGHTHIGHAAAAA, and the stomping up to get changed and teeth brushed.

Case in point, my youngest son was JUST pretending to whine like the dog and my oldest whined at him not to whine anymore. It. Just. Never. Stops.

Then there’s all the pissing and moaning on the internets. I’ve read so many posts and articles, and that’s fine, but then I start reading the comments…. Oh lawdy, should NOT have done that.  I mean, I’ve never EVER heard so much negativity, probably EVER, since I was a teenager and spent an hour and a bottle of Aussie hair spray on it only to have it fall after five minutes (seriously, the world was coming to an end when that happened). Really, if you go from all the stuff being spewed, we’re all going to die from cancer and live miserably hate filled lives if we don’t do this or don’t do that. You can’t eat eggs because you’re a male chick murderer or you can’t drink milk because WHO DOES THAT or you can’t eat red meat or you can run because it ruins your knees, and well, you’ve heard it.  Basically, we’re all wrong all the time if you listen to some of these people.  And so many people are just mean to other people.

I’ve had a really “interesting” few weeks, which is why I haven’t written in so long. Running shoe shopping became very, um, important since I found this when I forgot to put my dog in her kennel when I went out for two seconds: 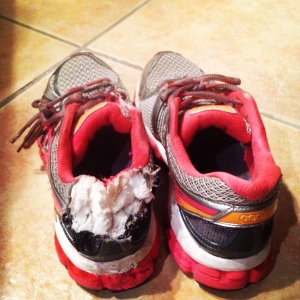 Thank goodness these were my secondary running shoes. WERE.  Like the shoe/dog issue above, this is just life. It can get you down. I could tell you everything goofy that happened last week (chasing my cat from under the deck with my dog and having her turn feral and scratching and biting me is one example) , but I think the important part of what I got out of it is how important a good attitude is.  I could’ve had so many things ruin my day and make me grumpy, but I’m choosing to get over it, or laugh about it, or have a beer, or whine to hubby for a few minutes, then be done with it.

So how do I repel the negativity halo?

2) Stop looking at comments and reading articles that appear to be stupid. Chances are they are.

3) Run. I’m so in love with running right now, I want to marry it. But I’m already married and that would be illegal. I’ve just randomly  started crying the past few weeks because I am still reconciling the fact that in just a few short weeks, I’ll be fulfilling a dream in Boston. I’m scared, I’m nervous, I’m excited, I’m honored.

4) Listen to music. Isn’t it amazing what music can do for the mood? I listen to it often and I dance. Yes, I’m the one in the car dancing and singing. Why not? I might also be the one with the finger up my nose trying to get the whistle out of it, but just look the other way.

5) Find cool races to run.  Running Boston and Beyond has just moved past Boston and will be doing something different in July… a mountain race!  The Scream Half Marathon is a race in the Pisgah National Forest with a 2,000 ft descent. I. Can’t. Wait.

6) Keep on keepin’ on. Really, just keeping my head up is important. It’s dark, it’s cold, it’s rainy, I hear whining and complaining all the time. But I’ll just turn on the music and eat my eggs with a side of milk. And smile as I spray all the negativity away with my unicorn.

Anyone else feeling like people have a case of the Monday’s…. on Friday?

6 thoughts on “I Want A Unicorn That Farts Rainbows”