Posted on October 2, 2013 by Running Boston and Beyond

I have terrible shin splints so I’m not able to run.  It’s been several weeks since I’ve been able to run.  Oh wait, that’s only how it feels…. Actually, it’s been one full day.  It feels like twelve years.  An eon.  And I hate it.

I’ve been getting physical therapy for several weeks now, and I feel like we’re just now making progress. When I went to therapy last Wednesday, he centered in on the problem and I REALLY got up close and personal with myofascial release therapy. Oh boy did I. So when I went in today, I still had left over bruises from last week, so he was “easy on me”.  I was sort of looking forward to it because I know that it works and I know that I want to run.  Like now. Like yesterday.  I’m ready to go. But when he starts to put his needly fingers into my shin bone, I kinda want to kick him in the face. Accidentally of course.

I have to say that it was a little worse than last week, probably because it was slightly sore from last week, but it (the pain portion of the session) didn’t take as long. New bruises quickly emerged so I decided to give myself the Rorschach Test (you know, the Ink Blot Test) to see what I came up with.  Would it be a Boston “B”?  Would it be a race medal design? No.  It wasn’t.  Now we have a new cat in our house named BC Jones. What does BC Jones mean? It’s the name my son came up with, because BC = Bruise Cat and Jones is because Jones is cool.  ** 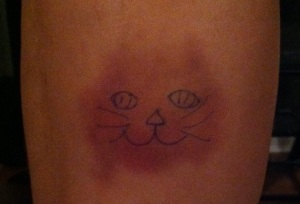 I kind of like BC Jones. He won’t leave hair all over the place like my other cats do.  He won’t try and trip me when he can see the bottom of his food dish like my other cats do. He doesn’t require a litter box or vet visits.  He will slowly disappear and I will be able to run again.  Welcome to our house, BC Jones, but you are NOT welcome to stay!

** I wondered whether or not I should post a picture of a bruise. I mean, gross.  Then I thought about runners and I decided to hell with it. How many times have we whipped off our sock and said, “Hey, look at my missing toe nail!  Cool, huh?!”  or shown someone our swollen Achilles or puked at the end of a race or blown a snot rocket during a run? Yeah, bruises don’t matter.